The Glory of the Fluffernutter 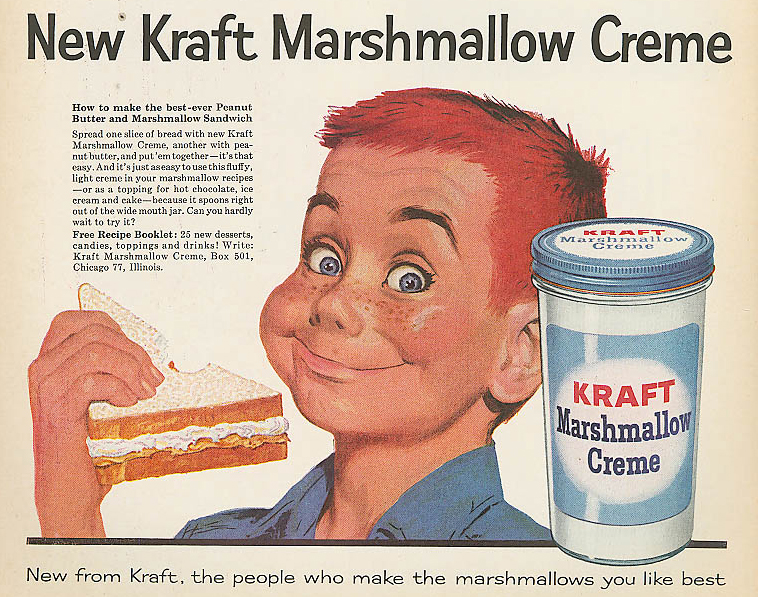 As a tail-end Baby Boomer, many memories of the early 1960s linger even as I’ve just turned 60 (of which I can only say, Holy She-it!). The talented jingle composers of the ’60s had no peers when it came to luring young viewers with catchy toons into needling their parents endlessly for something we wanted. The catchier the tune, the longer it lingered in our minds, and the more we begged. A $10 toy was a difficult “get,” but marshmallow fluff was inexpensive, and thus required less whining and persuasion.

This brings me to one of the great joys of my childhood: the fluffernutter. And you can revisit my ancient memory here.

So, having watched the video, you know that a fluffernutter is made from putting peanut butter (smooth, not crunchy) and marshmallow fluff (a lot, not a little) on squishy white bread (not toasted, and not wheat). If you use crunchy peanut butter, toast the bread, use whole wheat bread, put Nutella on the damn thing, or commit any other accursed act such as putting bacon on the sandwich, I’m done with you.

What the heck is a Fluffernutter? Who named it? Where did it come from? How long have people been eating this thing? With the somewhat trustworthy help of TrickyPedia. and Boston.com, I shall answer your questions because you can’t really allow your day to proceed until the facts are known.

Would you believe that there are three competing claims for the invention of fluff? Who knew.

The stuff we love was first cooked up by Amory and Emma Curtis. (Did I mention that people claim fluff is a New England thing?). They lived in Melrose, Mass, and concocted “Snowflake Marshmallow Crème” in 1913. They also were the first ones to make a sandwich out of it by adding peanut butter in, at the latest, 1918. A lot more people had no teeth or were wearing choppers back then, so something that was smooth and didn’t stick to the teeth was likely welcomed. Of course, eating too much fluff long term may well result in the eventual loss of your teeth, but that’s an issue for another day. The Curtis Marshmallow Company went kaput in 1947.

Next up is Limpert Brothers, Inc., which states it created “Marshmallow Fluff” in 1910 as a sweet to be used on top of ice cream. They also trademarked the name at some early point. And here’s where it gets convoluted. Another company was also selling a product called “Marshmallow Fluff,” which is of course a no-no because the name was trademarked. Limpert goes into much detail about all of this on their website.

Now that we have finished with all the historical nonsense, I will explain the differences between the various ingredients on the market (yes, I am obsessed and make no bones about it.) The most common brands of fluff found in supermarkets these days are Durkee-Mower’s “Marshmallow Fluff” and Kraft’s “Jet-Puffed Marshmallow Crème,” which first appeared on the market in 1958. (Ugh, the year I was born.) I’ve never seen the product Limpert Brothers sells; it seems designated for wholesale only and is still sold in gallon cans to stores as a topping for ice cream.

Is there a difference between “Marshmallow Fluff” and “Jet-Puffed Marshmallow Crème”? You betcha! I’m neither a chemist nor a chef, thus won’t go into the details of the ingredients. We only really care about what it does on a sandwich, don’t we? “Marshmallow Fluff” is somewhat gooey rather than light and fluffy. When you put “Marshmallow Fluff” on a piece of bread, it almost immediately starts to smooth out and in a few minutes it begins spreading like the Blob. “Jet-Puff Marshmallow Crème” has more body, and is light and fluffy. It pretty much sits where you put it on the bread, at least for longer than “Fluff.” The Kraft and Durkee products also taste slightly different. If I were to sit there and just eat one of the two with a spoon right out of the bottle, it would be “Jet-Puffed Marshmallow Crème.” However, as far as the best ingredient for a Fluffernutter, it’s definitely “Marshmallow Fluff.” And I don’t care what the hell kind of peanut butter you use, as long as it’s smooth and creamy like Jif, Skippy, or Peter Pan.

As you can see, I prefer my Fluffernutters to be “loaded.” I also still eat Lucky Charms out of the box. That’s all and goodnight.