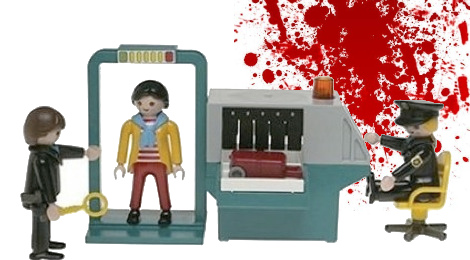 We all know that the TSA maintains a secret watchlist of suspected terrorists who are somehow suspicious enough that they can be denied the right to fly or be subjected to humiliating screenings (but not suspicious enough to charge with any crime), but it turns out that that TSA has another watchlist of problem fliers -- people who've complained about TSA screeners, as well as people who are accused of having "assaulted" screeners (the definition of "assault" includes women who've removed screeners' hands from their breasts).

The list, called the "95 list" is nominally a list of people whose contact with screeners may be "offensive and without legal justification," including anyone whose behavior presented "challenges to the safe and effective completion of screening."

The TSA is not an intelligence agency and has no institutional capability for assessing risk.

The TSA officially claims that fewer than 50 people are on the list. Government security officials speaking anonymously to the New York Times says the number is much higher, with new names added daily.

The TSA claims 34 screeners were assaulted on the job last year. It has never provided any documentary evidence or even cursory details to support this claim. Thousands of Americans have filed detailed claims about assaults they've experienced by TSA screeners. I was once punched in the balls by a screener at O'Hare airport during a pat-down; the screener was evidently angry because I'd asked him not to place a heavy tray on top of my laptop.

The TSA has a long history of intimidation. In 2002, it created a system of fines to penalize travelers with bad attitudes, charging up to $1,500 for any alleged "nonphysical interference." This included any "situation that in any way would interfere with the screener and his or her ability to continue to work or interfere with their ability to do their jobs," according to a spokeswoman. The TSA failed to specify exactly how much groveling was necessary and eventually abandoned the regime of fines.

If I have not yet made the TSA watchlist, it's not for a lack of trying. The agency's former chief, John Pistole, once claimed a 2014 article I wrote was "misleading, inaccurate and unfairly disparages the dedicated (TSA) workforce." The following year, after I endured a patdown in Portland, Ore., that nearly turned my private parts into a pancake, I raised hell in USA Today and elsewhere.

I filed a complaint after the Reagan airport incident, in part because the TSA confiscated a cigar cutter — even though its website explicitly states that cigar cutters are permitted in carry-on luggage. Did TSA screeners fear I would break into the cockpit and circumcise the pilot?

After pointlessly groping countless Americans, the TSA is keeping a secret watchlist of those who fight back [Jim Bovard/LA Times]