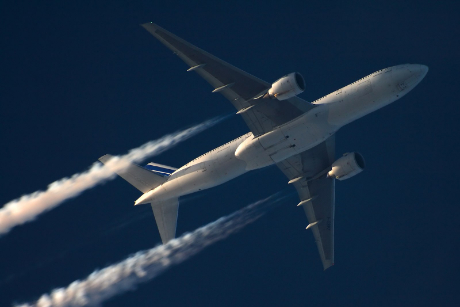 My nation, Canada, is a land of endless bounty. Yesterday, it provided us with a feral peacock infestation. Today? A case of pinkeye allegedly caused by poo raining down from the sky.

Susan Allen of Kelowna, BC (it's absolutely lovely in the summertime – you should visit!) was driving home with her son after enjoying a pleasant lunch with her mother in the lakeside district of Peachland. It was a beautiful day, spent in a beautiful place. On the way home, Allen opened her car's sunroof to enjoy a bit of fresh air and, apparently, got hammered by shit falling from the sky.

From the The Star:

The feces appeared to have fallen from a plane that she saw when they were stopped at a red light with another car that was also hit, Allan said, adding she and the other driver went to a car wash and sprayed themselves off before she called the Kelowna airport.

She said an administrator told her Transport Canada would be investigating and the department has confirmed it is looking into the possibility of frozen lavatory waste, called "blue ice," falling from an aircraft.

But wait, there's more! As a result of her forced fecal frolics, Allen ended up with conjunctivitis in both of her eyes – that's pinkeye y'all – and had to be placed on a run of medication to deal with the affliction.

While talking to the press about her shitty weekend, Allen stated that "All we want people to know is that it was quite devastating to be covered in poop and I hope it never happens to anybody else."

Transport Canada is investigating the incident. It's believed that, if the poop did come from an airplane passing overhead, it may have been due to a faulty blackwater holding tank valve.

GNS Foods of Arlington, TX supplies nuts to airlines. Now that Airline traffic has taken a nosedive, the company is stuck with 42 excess tons of cashews, pistachios, pecans, and almonds. They've taken to selling them at their retail store for $6 a 1.25 lb bag, "selling for less than they cost GNS wholesale, even […]

pic.twitter.com/Rloh34F5ID — Steadman™ (@AsteadWesley) June 17, 2020 The Hill reports that a pro-Trump activist named Brandon Straka was kicked off an American Airlines plane because he wouldn't wear a mask. A New York Times reporter who was also on the flight took a video that recorded Straka arguing with the flight crew: "Sir, are you […]