The Rent's Too Damned High: 15,000 words on the ways real-estate speculation and inequality have killed NYC 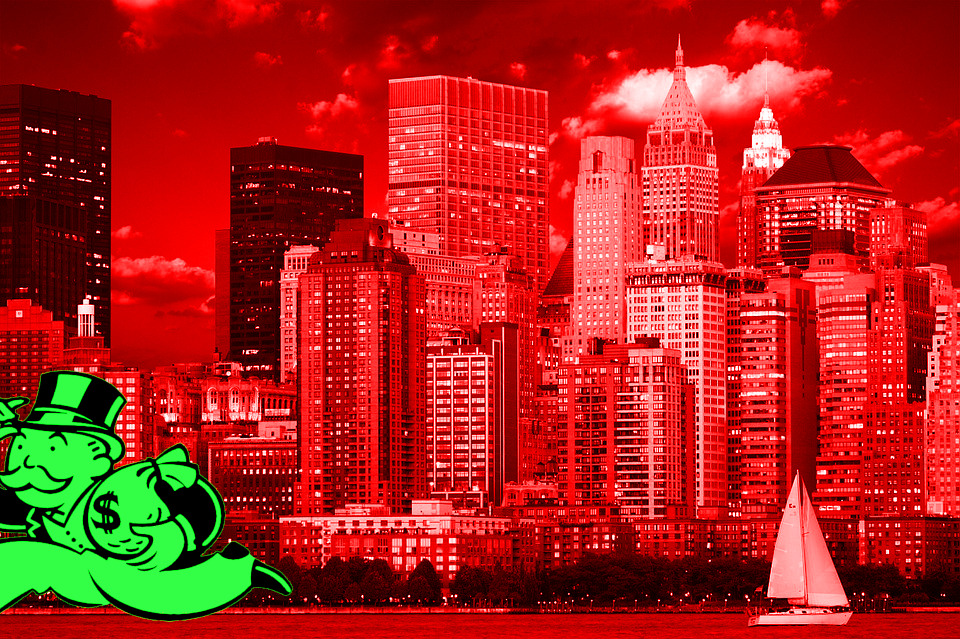 Harper's has published The Death of a Once Great City, Kevin Baker's beautifully written, 15,000 word, non-comprehensive list of all the ways that raising the rents in New York City (something that was enabled by the related phenomena of the increasing wealth of the global rich and the influence of property developers on New York City's planning) has squeezed all the juice out of the city, evicting its people and its businesses in favor of "land banked" condos and co-op units that serve as "an investment, a pied-à-terre, a bolt-hole, a strongbox" -- and whose only viable retail is chain pharmacies and ATMs.

From Baker, I discovered that the Essex Street Market is slated for destruction, to make way for a huge "mixed-use development," squeezing out the most Pinkwaterian extrusion into our dull universe and snuffing out the whole idea that New York can be home to anything distinctive, unique, and precious.

As Baker points out, the problem isn't and can't possibly be rent control. The modest number of rent-stabilized units (and the infinitesimal number of rent controlled units) has been in free-fall, while new housing starts have continued unabated (thanks, in part, to sweetheart tax deals for property developers), and the rents keep on going up, up, up.

My only complaint about Baker's piece is that it isn't called "The super-rich treat the human necessity of housing as an asset class, so it's getting more expensive, and that is destroying the world."

Because, of course, it's not just New York (as Baker notes): it's every great city ("San Francisco is overrun by tech conjurers who are rapidly annihilating its remarkable diversity; they swarm in and out of the metropolis in specially chartered buses to work in Silicon Valley, using the city itself as a gigantic bed-and-breakfast. Boston, which used to be a city of a thousand nooks and crannies, back-alley restaurants and shops, dive bars and ice cream parlors hidden under its elevated, is now one long, monotonous wall of modern skyscraper. In Washington, an army of cranes has transformed the city in recent years, smoothing out all that was real and organic into a town of mausoleums for the Trump crowd to revel in").

In the secondary cities, it's also happening, just in a different form: those are the cities most heavily damaged by the foreclosure crisis, where private equity landlords have cornered the market, hiked the rent, and created an epidemic of evictions at a rate never seen in the USA.

The average New Yorker now works harder than ever, for less and less. Poverty in the city has lessened somewhat in the past few years, but in 2016 the official poverty rate was still 19.5 percent, or nearly one in every five New Yorkers. When the “near poverty” rate—those making up to $47,634 a year for a family of four—is thrown in, it means that almost half the city is living what has become a marginal existence, just one paycheck away from disaster. By comparison, the city’s poverty rate in 1970—in the wake of Lyndon Johnson’s war on poverty—was just 11.5 percent. By 1975, during the supposed collapse of New York, it had increased to 15 percent, a figure lower than it has ever been since then.

The immediate cause of the increase in poverty doesn’t require much investigation. The landlords are killing the town. Long ago, the idea that “rent is too damn high” in New York was so thoroughly inculcated into the city’s consciousness that it became a one-man political party and a Saturday Night Live sketch. But the rent is too damn high, and getting higher all the time. Whereas the old rule of thumb was that your rent should be one paycheck a month, or about 25 percent of your income, the typical New York household now spends at least one third of its income on rent, and three in ten renter households pay 50 percent or more, according to the latest New York Housing and Vacancy Survey.

And the situation is getting rapidly worse. According to the same survey, the price New York landlords wanted for vacant apartments from 2014 to 2017 increased by 30 percent, while the median household income for all renting families from 2013 to 2016 went up by 10 percent. The burden has fallen hardest on those who can least afford it, according to the real estate database StreetEasy, with rents rising fastest on the lowest wage earners in the city.

The Death of a Once Great City [Kevin Baker/Harpers]