I was gifted a scenic flight over Black Rock City ​ 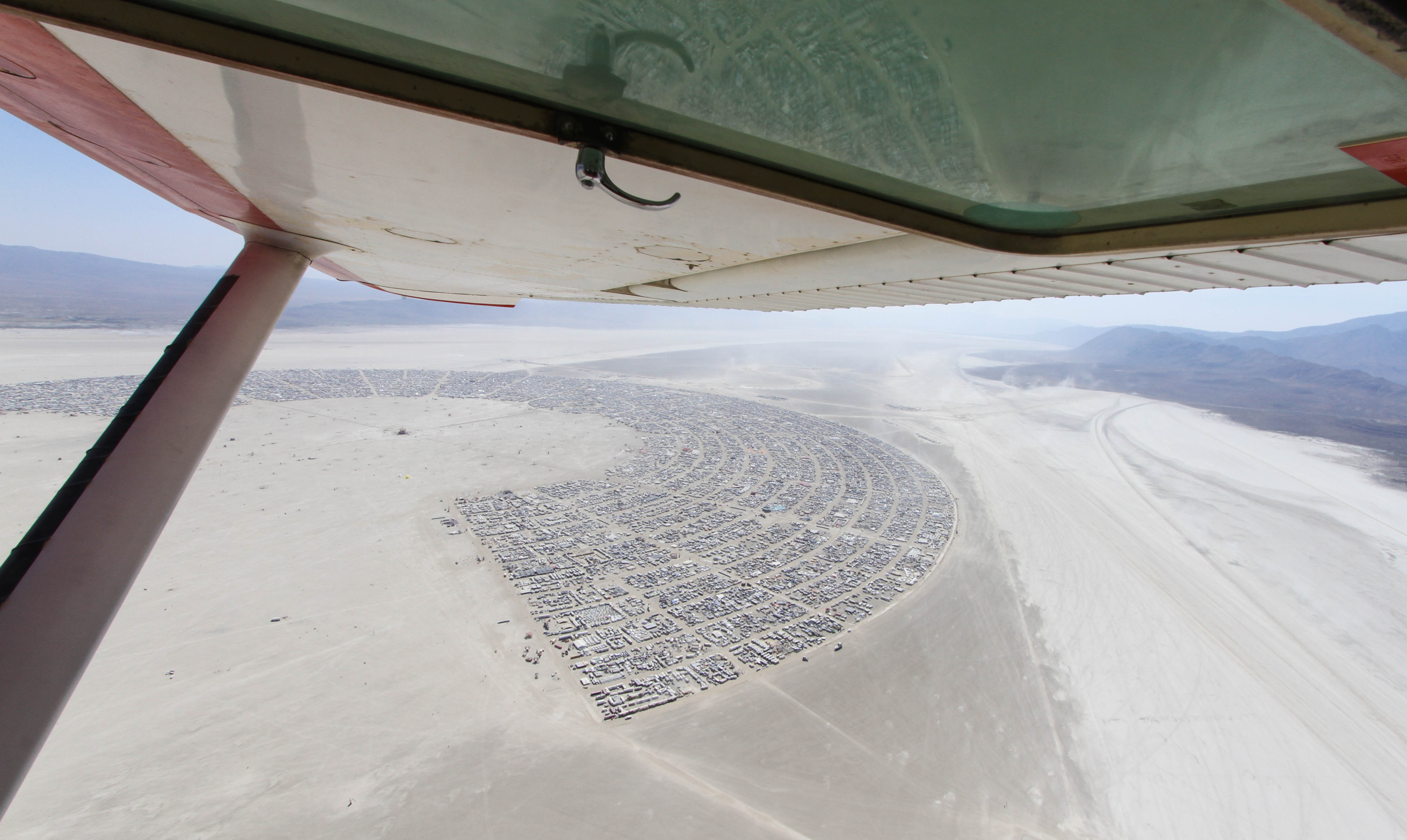 I was gifted a scenic flight over Black Rock City ​

I have a long history with Burning Man, both on playa and off, but I did not know until last year that ​a small group of ​generous Burner pilots ​gift scenic flights ​-- ​at their own expense and discretion -- over Black Rock City during the event.

The catch? Well, first you need to go to Burning Man, which means getting a ticket. Then, once you're out there, you have to get up real early, put your name on a list at the Black Rock City Municipal Airport and wait -- in the heat, for hours -- for your name to be called. Since the planes are small and each ride is about half an hour long, the wait to get that amazing bird's eye view can be upwards of six hours or more.

I woke up late on Saturday, the morning of the Burn. It was the last day pilots were gifting these rides for 2017, so I pedaled over anyway and put my name on the list. It was 9 AM and the guy in charge warned me it would be at least six hours before I'd be airborne, if I was "lucky." The airport was a fair distance away from where I was camping, so I decided to stay put. To kill some time, I asked the airport staff if they needed a volunteer. As luck would have it, they did.

I spent about 45 minutes organizing papers in an air-conditioned trailer (oh yeah) and the remainder of my three-hour shift checking passengers against flight manifests at the gate. I enjoyed it. The time passed quickly and I gained a bit of insight into the airport's operations. When my shift was over I was told that, because I volunteered, I could go to the front of the scenic flight line. I was thrilled for the unexpected bump!

I was soon introduced to my pilot, a friendly, salty character named "Purple Haze," and the other two passengers, a couple using their playa names of "Spitfire" and "Landshark." We learned it was Purple Haze's last scenic flight of the day (and the year), and the 2017 event. In other words, we were lucky to get a flight at all.

We also learned that Purple Haze takes up Burning Man founder Will Roger Peterson each year to get his aerial shots of the temporary city. Lucky and in good hands.

The plane, a 1959 four-seater Cessna 182-B, has a big purple streak spray-painted across its body. It's aptly called "The Purple Haze Cessna" and it's a thing of well-worn, vintage beauty.

Spitfire got in first. She and Landshark sat in the back two seats. Purple Haze then moved the co-pilot's seat into position so I could climb in the front. Spitfire remarked in joy, "It smells like an old VW in here!" and, sure enough, it did. I speculated that the seats were probably filled with horse hair like the ones in vintage Beetles.

Purple Haze shared safety info with us and what our in-flight route would be (we'd "circle clockwise," as he was directed, around the temporary city). We got secured in our seatbelts, then he told me -- the one sitting next to a window -- that once we were up in the air, he'd give me a cue, and I could gently unlatch it. Once that was done, I could stick my hand out, with my heavy DSLR with its wide-angle lens, to get pictures. I didn't let on that the idea of sticking my hand out the window with a massive camera frightened me a bit.

This is the road that gets you in and out of the Burning Man event.

Once we were up, he gave me the cue and I gently unlatched the window and let it open fully against the wing. It gave me a real rush. Then I started shooting like mad. I got over whatever fear I once had real fast. There was no time to waste.

We circled the half-circle city and, because it was his last 2017 passenger flight, Purple Haze took us off course a little. Instead of flying us straight back to the airport, he took us behind an actual black rock, Old Razorback Mountain. We got real close to it:

Then we flew near an old hot-soaking haunt of mine from back in the day, Frog Pond.

I lost track of time but I'd say it was about a 20-minute journey in total and it was just as exhilarating and spectacular as you can possibly imagine. Once grounded and parked, Spitfire, Landshark, and I expressed our enthusiastic gratitude to Purple Haze for his incredible gift of flight. We took a bunch of photos with him and his namesake Cessna, and then parted ways.

Me and Purple Haze x 2

If you​'re​ go​ing​ to Burning Man and want to try to catch a ​flight, there are some important things you should know before heading out ​to the airport.

Be prepared to be wait for a very long time and be turned away. There are just not that many pilots gifting rides, or hours in the day for them to take people up. This ​is ​is not an officially-sanctioned program by the airport and their team simply doesn't have the resources for you to hang out at there all day. It's hot, remote, and shade is minimal. You'd be better off signing up, leaving, and biking out to check where you are on the list every few hours or so.

Also, it's unlikely that there will be impromptu volunteer opportunities at the airport on the day you want to fly.​ I was extremely lucky on the day I went. If you want to go that route, sign up pre-playa to try and get on their volunteer team. But remember, if you are accepted to be on the team, you are still not guaranteed a flight.

As I mentioned before, the small group of pilots who do gift flights do it at their own expense and discretion. No one is entitled to get onboard. Be patient. Be kind. If it's really important for you to fly, be ready to try again on another day.

Lastly, if you do end up flying, remember to thank your pilot. This is a gift. Jet fuel is expensive and their time is valuable. I noticed some people brought nice unopened bottles of booze to stock the bar for the Burn night party for the pilots, but verbal thanks are welcome and appreciated too.

This is my thanks to you, Purple Haze. Happy flying this year and beyond!

photos by me, except that last one. I believe Landshark took that one.