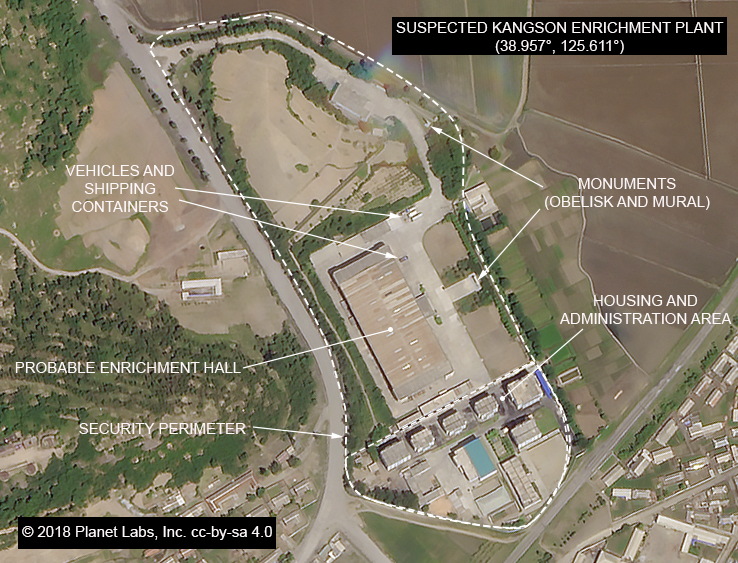 Journalist Ankit Panda has a bombshell report over at the Diplomat today that identifies the location of Kangson, a covert North Korean uranium enrichment site situated just outside the capital city of Pyongyang.

“The Diplomat, along with a team of open source researchers at the Center for Nonproliferation Studies at the Middlebury Institute of International Studies at Monterey led by Jeffrey Lewis, was able to locate the Kangson covert enrichment site.”

Beginning in the early 2000s, North Korea began building a discrete, largely unnoticed, cluster of buildings, not far from the banks of the Taedong river, a few kilometers south-southeast of the North Korean capital of Pyongyang. Located on the eastern end of Chollima, a town best known for hosting a massive steel manufacturing complex since the Japanese occupation of the Korean Peninsula, the facility had drawn no public attention—until now.

The facility is North Korea’s first covert uranium enrichment facility, known by the U.S. intelligence community as the Kangson enrichment site. It is where, for more than a decade—possibly as long as fifteen years—North Korea has been enriching uranium for use in nuclear weapons. It is older than the well-known enrichment site operated by North Korea since at least 2010 at the old Fuel Fabrication Plant at Yongbyon. The Kangson site is one of two known North Korean covert enrichment sites.

The Diplomat, along with a team of open source researchers at the Center for Nonproliferation Studies at the Middlebury Institute of International Studies at Monterey led by Jeffrey Lewis, was able to locate the Kangson covert enrichment site. Separately, a U.S. government source with knowledge of the latest intelligence on North Korea’s nuclear weapons program, when asked, confirmed to The Diplomat that the discovered site corresponded to the covert enrichment site referred to by the U.S. intelligence community as Kangson. U.S. intelligence has monitored this site for more than a decade.