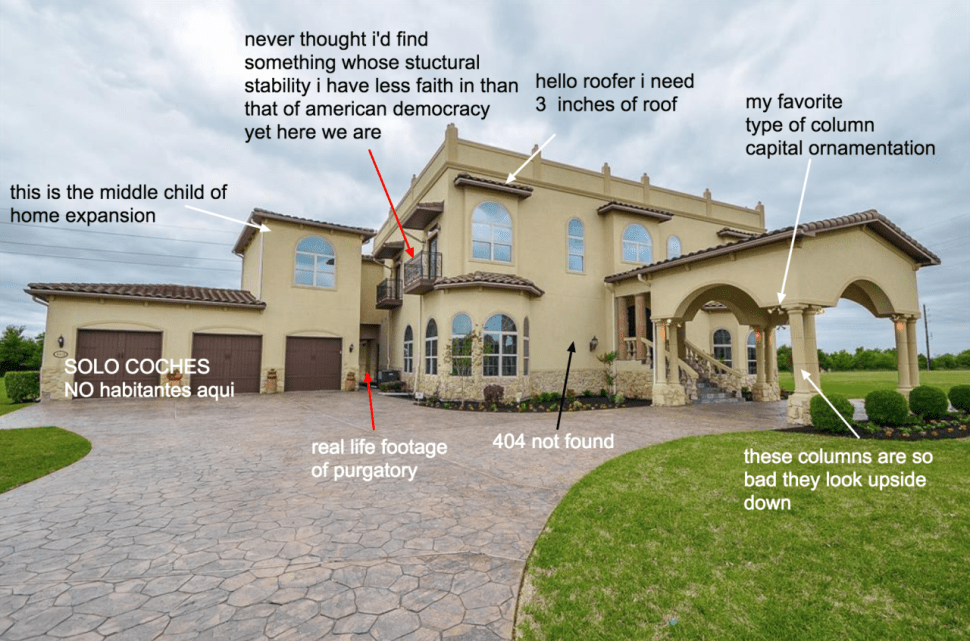 As far back as 2012, UCLA researchers were publishing studies that showed that Americans basically never used their "formal spaces" -- dining rooms, "great rooms" and parlours -- instead, they spend most of their time in the kitchen and the "informal" den.

Kate Wagner, proprietor of the excellent McMansion Hell blog (previously) shrewdly analyzes the meaning of these vast, expensive, empty spaces: the short answer is, "to make others feel small."

As you'd expect of Wagner's work, the column is witty, acerbic, and insightful, a snapshot of an American pathology at its zenith.

These spaces are frequently articulated in a house’s architecture, partly for their symbolic value. These elements show up in exaggerated forms: The irregular massing and enormous windows of two-story foyers and great rooms, as well as formal dining rooms (often nested in a separate mass or articulated with wall-to-wall windows) facing the street, are such common McMansion features that yours truly has, over the past three years, immortalized them with a series of pejorative terms (Lawyer Foyer! Dining Turret!). If these rooms were designed for their actual practical purposes (entertaining) instead of being architectural megaphones for their owners’ money, they wouldn’t be cavernous spaces where it takes 50 steps to walk from the refrigerator to the oven, where the windows are so large that the heating/cooling bill is hundreds of dollars with an added bonus of being able to get a sunburn inside, and where the mere clinking of plates (much less a conversation) mercilessly reverberates through 3,000 square feet of pure echo.

The ironic inefficiency of hyper-exaggerated high-end entertaining spaces belies a truth: These spaces aren’t really designed for entertaining. They’re designed for impressing others. And not just impressing others: After all, it’s general politeness to compliment a host on their home no matter how impressive it is. The real goal, deeply embedded in these oversized, over-elaborate houses, is not for guests to say, “Oh wow, this is nice,” but to make them think, “Oh wow, this is nicer than what I have and now I feel jealous and insecure.” In true American irony, these giant “social” spaces (and McMansions in general) are birthed from a deeply antisocial sentiment: making others feel small. Considering that so often our guests are members of our own family adds another layer of darkness to the equation.