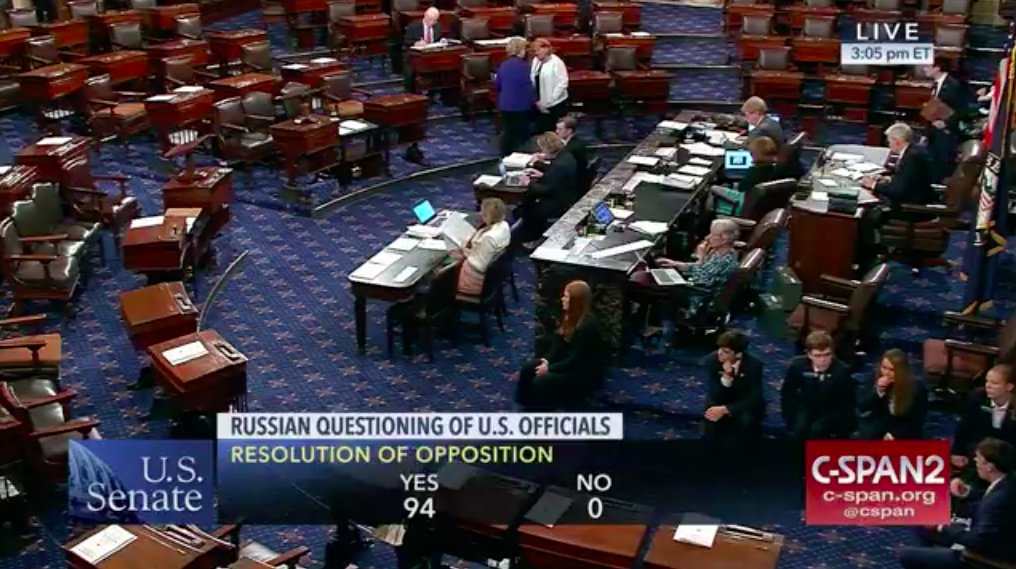 How weird is it that this needed to happen.

The Senate has unanimously passed (98-0) a resolution voicing opposition to allowing Russia to interview US diplomats and agents. Such a proposal was offered by Russian President Vladimir Putin on Monday to Donald Trump in Helsinki, and was then weirdly rejected—not-rejected just this afternoon by the White House.

Here's the text of the resolution:

Here are live tweets from reporters and others following.

98-0. Bipartisanship is not dead yet in the US Senate. Thank you all for your support.

When Trump says Russia is no longer targeting America, that’s not how this American feels.Putin is most certainly targeting and intimidating me. And I’m an American.

Vote is not over, but it sure looks like that Schumer resolution about protecting McFaul/Browder is going to pass overwhelmingly. pic.twitter.com/2C57btTuLp

The Senate unanimously passed a symbolic measure Thursday aimed at dissuading Trump from accepting a deal proposed by Putin to turn over American officials for questioning by Russian investigators. https://t.co/OCDQLADpq4

The Senate, 98-0, voted for a resolution opposing Vladimir Putin's proposal to interrogate U.S. officials, including @McFaul

The Senate has voted unanimously to pass a resolution opposing allowing Russia to interrogate U.S. officials -- a proposal Vladimir Putin made to President Trump during their meeting. Trump initially called it an "incredible" offer. Today the WH said he disagreed with it.

The Senate has adopted a non-binding resolution that the US “should refuse” to allow US diplomats and other officials face “questioning by the government of Vladimir Putin.” The vote was 98-0. Sens. Richard Shelby (R-AL) and John McCain (R-AZ) were absent.

Senate overwhelmingly approved a resolution that opposed making former U.S. Ambassador to Russia Michael McFaul or any other current or former U.S. officials available for questioning by the government of Vladimir Putin.
The vote was 98-0.

Maybe next the Senate can hold a resolution to get the House GOP to stop outing confidential sources? https://t.co/w9y4o2ySwW