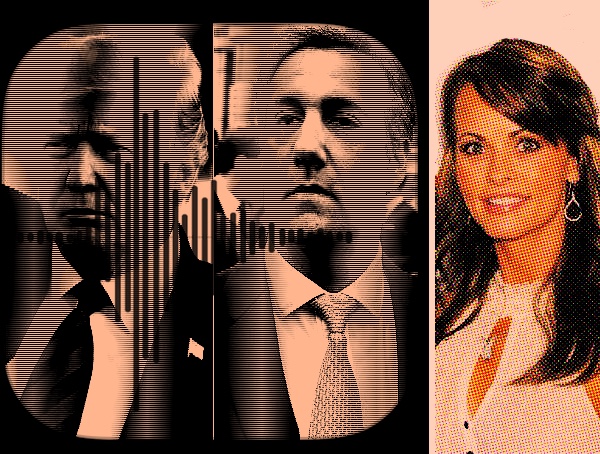 Donald Trump can be heard on an audiotape released by CNN tonight talking with his former fixer/attorney Michael Cohen about how to purchase the rights to a Playboy model's story about an affair she says she had with Trump years earlier.

The audio of the conversation was obtained by CNN and played first on the CNN program "Cuomo Prime Time."

The recording offers the public a glimpse at the confidential discussions between Trump and Cohen, and it confirms the man who now occupies the Oval Office had contemporaneous knowledge of a proposal to buy the rights to the story of Karen McDougal, a woman who has alleged she had an extramarital affair with Trump about a decade ago.

Cohen told Trump about his plans to set up a company and finance the purchase of the rights from American Media, which publishes the National Enquirer.

"I need to open up a company for the transfer of all of that info regarding our friend David," Cohen said in the recording, likely a reference to American Media head David Pecker.

Trump interrupts Cohen asking, "What financing?" according to the recording.

When Cohen tells Trump, "We'll have to pay." Trump is heard saying "pay with cash" but the audio is muddled and it's unclear whether he suggests paying with cash or not paying.

Cohen says, "no, no" but it is not clear what is said next.

No payment was ever made from Trump, Rudy Giuliani, the President's attorney, has said. Giuliani has previously acknowledged that the recorded discussion related to the buying the story rights.

The recording, which was provided to CNN by Cohen's attorney Lanny Davis, was made in September 2016.

'GET ME A COKE,' Trump bellows at one point.

Within an hour of the tape's broadcast, attorney Michael Avenatti said on MSNBC, when asked by host Lawrence O'Donnell what he hears, said: “I'm hearing two criminal co-conspirators conspire on making a payment and I'm hearing Michael Cohen be a sycophant for Trump.”

“There's no doubt that Michael Cohen has the goods on the president,” Avenatti said.

No payment was ever made by Trump, said Rudy Giuliani, an attorney for Trump known for lying.

Giuliani has previously acknowledged that a recorded discussion between Trump and Cohen existed, and was related to the buying the story rights.

Why? To hide the transaction from the IRS? The Federal Election Commission?

This is the tape Giuliani claimed was helpful to Trump. It’s not. https://t.co/3AeMoXgo7a

"It depends upon what the meaning of the word 'is' is.” https://t.co/1ZKf7N5mxM pic.twitter.com/DJ30tSAS0t

Reminder what Giuliani said this wknd (now seemingly contradicted): "That payment was never made, Mr Giuliani said, adding that Mr. Trump had told Mr. Cohen that if he were to make a payment related to Ms. McDougal, to write a check rather than send cash." https://t.co/SVWAUkZrFC

BREAKING: My Cohen-Trump tape notes @msnbc @Lawrence @maddow. As a guy who listened to a lot of audio fm wiretaps I can tell you 1) it was Recorded in Trumps Office 2) Audio device was on when he arrived in room. 3) Cohen took it out of his pocket to get clear recording.#SneakyAF