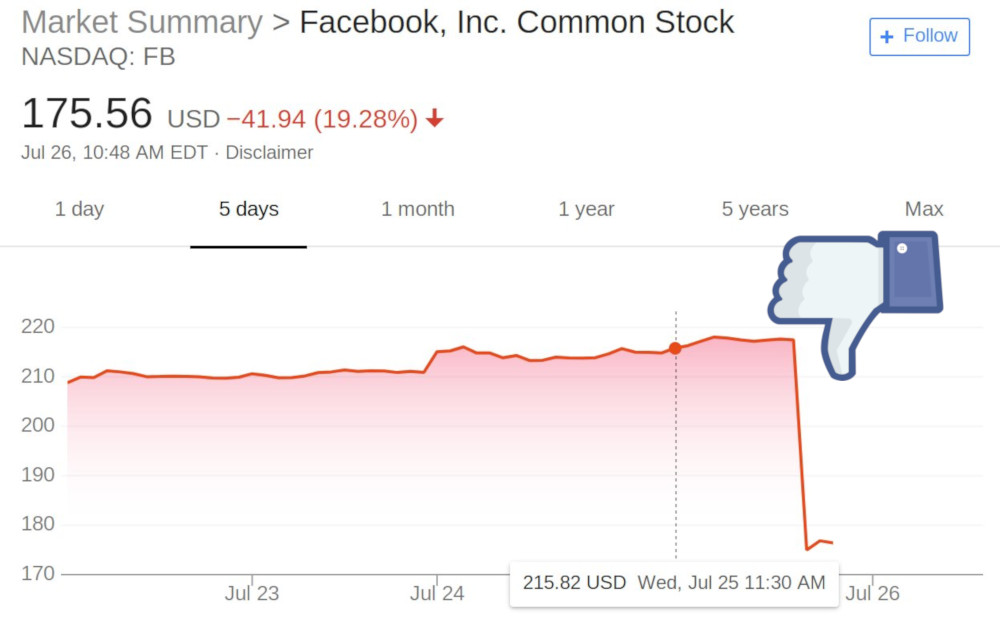 Analysts predicted that Facebook would average 1.48B daily users, but their latest quarterly figures showed only 1.47B dailies; their projected earnings were $1.33B, but they only turned in $1.32B, and they were expected to earn $5.97/user but only earned $5.95/user -- and so their shares dropped 24% (they're slightly up from that, but still down 20%).

The one metric cited as a potentially sound reason for this incredible plunge is the growth number: Facebook didn't post any growth in the USA and Canada. That's because virtually every living person in the US and Canada who would conceivably want a Facebook account already has one, and the number of new people discovering Facebook and signing up is effectively zero, while the number of people who are on Facebook but thinking about leaving is seriously nonzero.

There's a kind of Metcalfe's Law story here, too. Metcalfe's Law says that the value of a network is the number of possible connections you can make with it, and so every time you add a member to the network, its value doubles (one fax machine is useless, two faxes allow two people to connect, but three allows for four different connections, and four faxes allows for eight, and so on). The corollary of Metcalfe's Law is that every time you subtract a member from a network, its value drops in half, along with the number of possible connections. When you #DeleteFacebook, you make it easier for the people in your friend group to do so as well, because you are no longer part of the reason to continue using the service.

Facebook is in deservedly bad odor with the public, thought of as a shitty mountain of flaming, oily rags. Its shareholders have stayed in because Facebook kept posting growth and so they figured that maybe their shares were safe. But every shareholder has been poised to bolt the day that the other shoe dropped and Facebook started to fail. Somewhere in their animal instincts, the shareholders know that Facebook's days are numbered. The stalled growth spooked them. Maybe they'll come back, but I think the lesson from today is that Facebook's investors are now permanently skittish and poised for a panicked, mass sell-off.

I'm sure this fact has not escaped the notice of a short or two.

Of course, Facebook remains one of the most profitable companies in the world, posting more than $10 billion in profit for the first half of this year alone. And just because it plans to spend billions to better police its platform, don’t expect controversy around its decision making to go away.

For example, it remains under enormous pressure to develop clearer and more understandable policies and penalties around hate speech and fake news. Infowars’ Alex Jones appeared to threaten Special Counsel Robert Mueller with violence during a Facebook live session over the weekend. People are still trying to understand why that wasn’t a violation of those rules.

But now it also looks like Facebook isn’t just talking about hardening its platform and making sure the corruption that happened in the 2016 US election doesn’t happen again. It’s actually putting real money behind the effort.