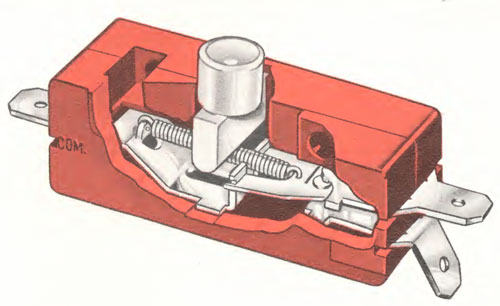 Nowadays, chances are you associate Cherry with the clickety switches on fancy keyboards. But it's been a global company for decades: if it's boring business-to-business hardware and it clicks, it might well be a Cherry.

With an assist from computing legend and junk mail collector Ted Nelson, the Internet Archive has collected a wide array of catalogs featuring some of Cherry Electronics’ Snap-Action switches from the 1960s. One such circular described Cherry’s appeal to manufacturers as such: “An entire company devoted entirely to one product—switches. This specialization means thorough application analysis … efficient, reliable assembly of switches … automated testing techniques … faster service.” And while the firm is best known for its keyboards today, these switches look nothing like the perfectly clicky mechanisms that Massdrop fans and heavy writers have been fawning over for years.

So where were they used? A notable example of a place where you’ve probably unknowingly used a Cherry microswitch is an arcade.