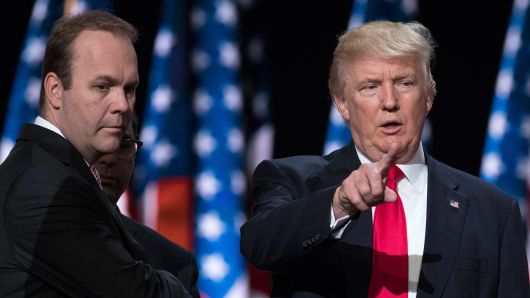 “Did you commit crimes with Mr. Manafort?” the prosecutor asked.

"Gates is admitting to everything," says NBC News' Ken Dilanian later, outside the courthouse.

Why would the prosecution begin by inviting Gates to confess to the crimes he's been charged with (and others)? They're establishing his credibility, and explaining the deal he's made--so the defense can't use any 'secrets' to impugn Gates' credibility as a witness.

He's expected to detail the crimes he committed with Manafort as the trial resumes tomorrow.

What do you want to bet that Paulie knew Gates was fluffing his expense reports, but considered a few hundred thousand here and there tip money for his chief co-conspirator?

I have seen some cold stares in my life but watching Paul Manafort stare down his former deputy, arms crossed, as Rick Gates recounted the long list of his alleged crimes was remarkable. #ManafortTrial

Per @KenDilanianNBC: Prosecutors say the $10M Manafort received from Russian oligarch Oleg Deripaska was a PAYMENT not a LOAN.

Which is what I've been saying for over a year now: Money launderers frequently will disguise payments as loans.#Maddow https://t.co/bZ1HludkVh

lawyer: so what would you say was your main activity with mr. manafort?

First time a senior Trump campaign official has confessed to a crime on the stand.