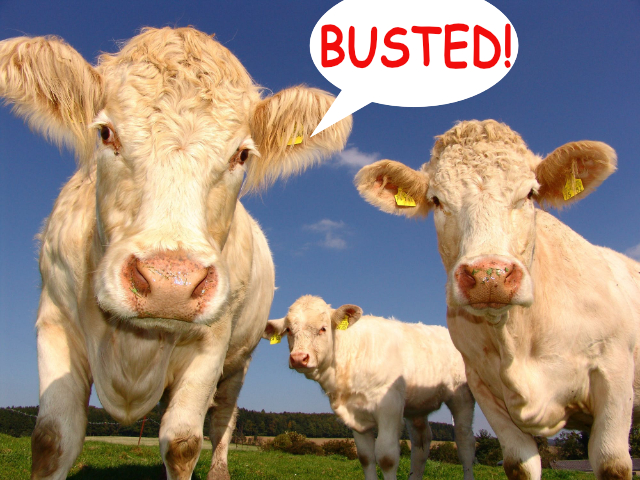 Last week, a Florida woman (because of course she’s from Florida) was caught rolling around in a stolen SUV. There was a chase! There was a crash! In an effort to escape her police entourage, 46-year old Jennifer Anne Kaufman left the other occupants of her pilfered ride behind and took off on foot. As she fled across a farmer's field, Kaufman could likely hear the sirens of the prowl cars that had been chasing her. The helicopter that the Seminole County Sheriff’s Office called in to help hunt her down? No way she’d have missed that.

Rural crime is a serious issue: everyone’s gotta do their part, even livestock.

According to the Tampa Bay Times, after the cows and Seminole County Sheriff’s deputies took Kaufman and her pals, who were good enough to stick around, into custody, they had a chance to search the stolen SUV and discovered "…more than a gram of cocaine, a crack pipe, syringes and a metal spoon."

Yeah, I know that it's more likely that the cattle were either curious or expecting to be fed by a human tromping through their field. But honestly, in a world so full of hate, violence and unspeakable dangers, I need to believe that, when faced with a situation like this one, a cow can be relied upon to rise up and mete out justice, that we all might sleep just a little bit easier.