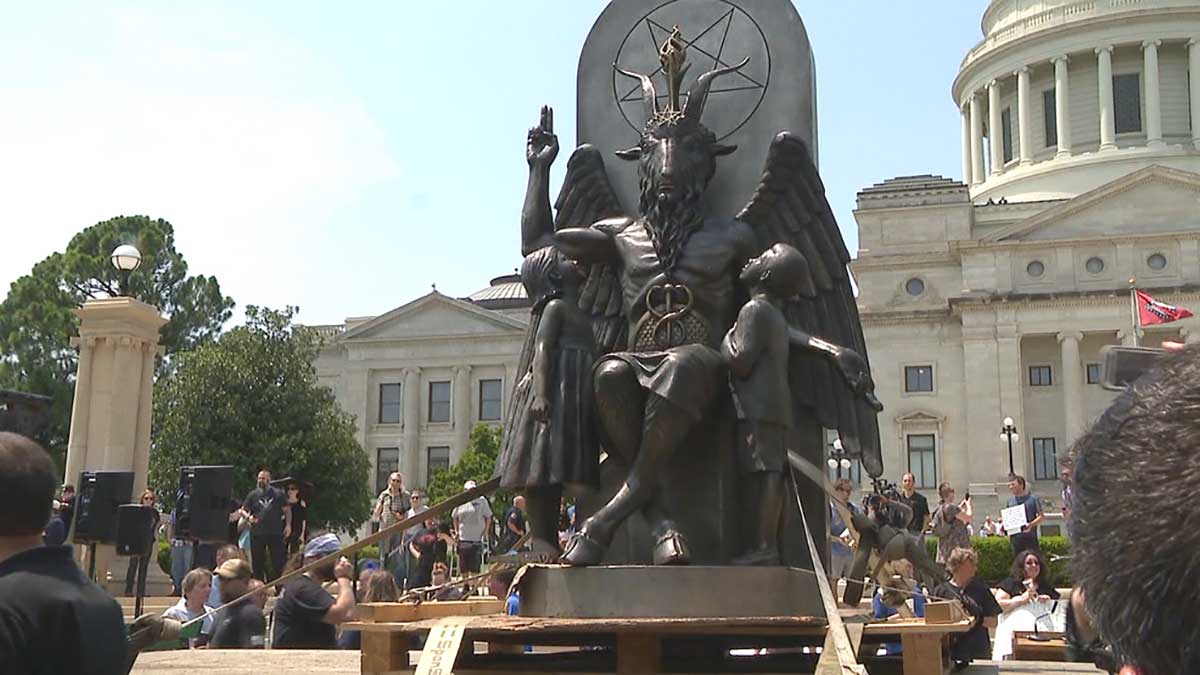 Members of the Satanic Temple held a "Rally for the First Amendment” yesterday at the Arkansas State Capitol, where they unveiled an 8.5-foot bronze statue of Baphomet with two adoring children at his side to the Arkansas State Capitol. The Satanic Temple is suing the Federal Government for the right to permanently install the statue on the Capitol grounds, arguing that since the Capitol has a Ten Commandments monument, other religions must be allowed to display their symbols there, too.

A group of Christians also attended the rally, and those interviewed by KATV were articulate and respectful of the Satanists and their statue. "God loves them, and we love them," said one. "These people are here in support of their beliefs, and I'm here in support of mine," said another. "Fortunately we live in a country that allows freedom of speech, freedom of religion. I may not necessarily agree with their faith, but I respect it."

The only person who came off as a nutcase was Senator Jason Rapert (R), the lawmaker who successfully led the unconstitutional campaign to erect a Ten Commandments monument on the Arkansas State Capitol grounds. He said in a Facebook statement, "No matter what these extremists may claim, it will be a very cold day in hell before an offensive statue will be forced upon us to be permanently erected on the grounds of the Arkansas State Capitol."

Worth noting: In 2017, the Satanic Temple sent Arkansas legislators a letter, asking them to sponsor a bill, that would allow for a statue of Baphomet to be placed on capitol grounds. Not one legislator responded Rep. Kim Hammer tells @KATVNews #arnews #arpx #arleg pic.twitter.com/x6tKm0euhl