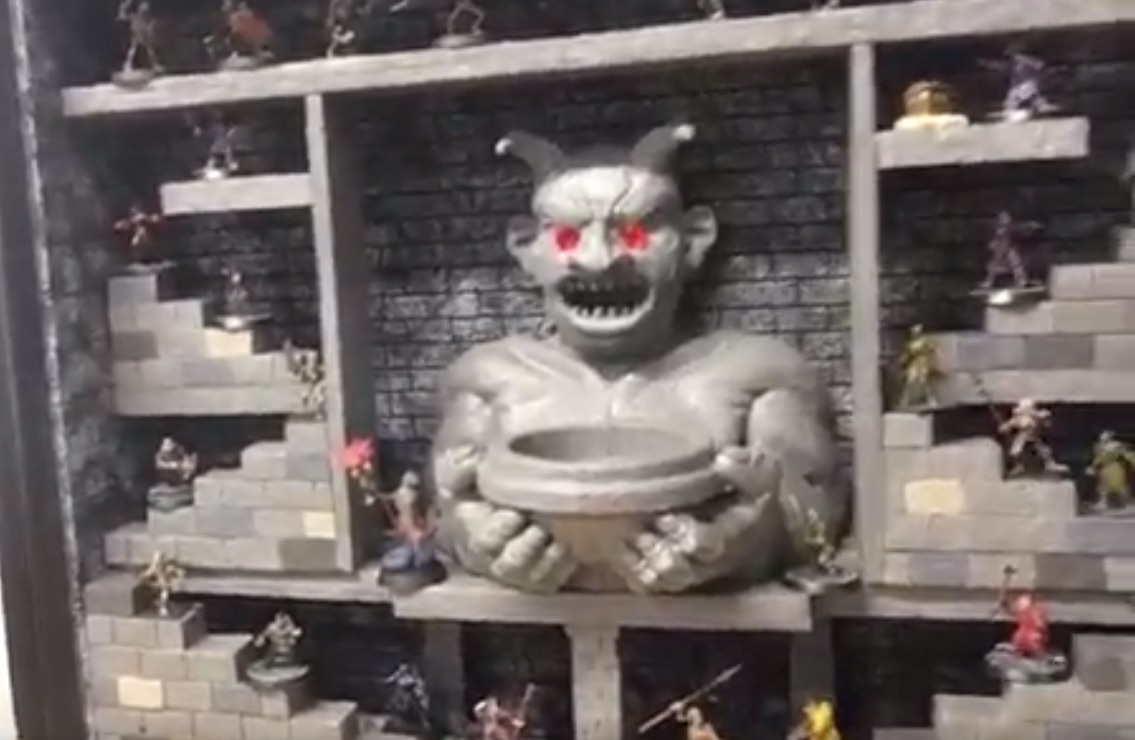 On Game Terrain Engineering, Jim Kelly posted this great tutorial on building a wall-mounted display for your lovingly-painted fantasy miniatures collection. The display, while looking quite elaborate and substantial, is little more than a cheap wooden picture frame, some foam board, and lots of time and hot glue. The Archdevil Moloch statue in the middle was 3D printed. That is, of course, optional.

Months ago, well-known dungeon crafter, DM Scotty, posted some similar wall displays on Facebook that used a printed image on their back walls (relevant to the theme of the minis on display) and simpler shelving. Scotty's might be an overall better solution for displaying your minis in a less busy but still thematic way. Jim admits that the lighting/viewability of some of the miniatures on his dungeon-themed display is not the best. He’s considering adding LED lighting.

I am definitely going to build some of these displays. With all of the time I’m putting into painting minis these days, I don’t want to hide my hard work away in cases when it could be enjoyed by others. I think this is a really fun way to do it. I can’t wait to plan out and create thematic frame-displays for my Frostgrave, Gaslands, Blood Bowl, and All Quiet on the Martian Front minis. For displaying years of collected Warhammer 40,000 armies? We’re going to need a bigger boat.

BTW: The latest D&D game book, Mordenkainen’s Tome of Foes, includes the exiled Archdevil Moloch in its bestiary, with great artwork, background, and stat block. Old school roleplayers will remember the gem-eyed Moloch statue being looted on the cover of the first AD&D Players Handbook. Mordenkainen’s bestiary also includes Eidolons, the undead spirits that get bound into statues, and even a stat block for Sacred Statue, the Moloch statue featured on that early D&D cover.

As a miniature modeler and painter, I am obsessed with any type of tiny world-building: model train boards, dioramas, dollhouses, and the like. So, naturally, I adore the work of “micro-mechanician” Bill Robertson. You can learn more about Bill and his amazing work in this piece on the TED Ideas blog and in his TED […]

In this helpful video, Brent of Goobertown Hobbies recreates one of his painting ah-ha moments when he first realized how to paint highlights on objects that don’t have edges. Everyone new to miniature painting knows the joys of finally figuring out how to successfully paint undercoats/shading, basecoats, and highlights. And then the next level of […]