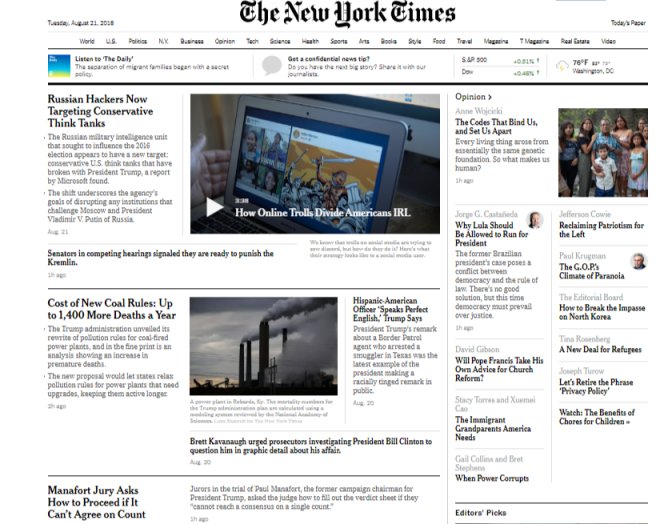 They're still on the stories' own URLs, but are gone from the homepage. Eric Lipton, an investigative reporter at the Times, points out: "But names of OP-ED writers still there."

Hey @nytimes, removing bylines from homepage is a step backward at a time when #journalism needs to demonstrate MORE accountability to readers and encourage MORE dialogue with them. The new layout makes the paper look like a faceless, impersonal behemoth. https://t.co/zD4619cwhy

Dear @nytimes, maybe there's a great reason why you removed reporters' bylines from your home page (but kept op-ed bylines). How about telling us the rationale? This isn't the 1990s. Transparency should increasingly be a must for you, not just something you demand of others.

Good morning and a hearty "f*%k you!" to whatever consultant convinced the @nytimes that its online front page doesn't need bylines. Do you think your audience isn't astute enough to care who wrote a piece? Do you think your reporters are interchangeable and generic?

Readers want to know who is behind a story before they commit to reading it, and this prevents it from happening. Current controversies over the Times' peaky opinion page, its chummy coverage of the far-right and its tendency to be steered by conservative anger are all becoming more personalized by obsessive readers. So it's inevitable that it will appear to be about certain individuals in some vague, paranoid way. And a bad time to toy with signifiers of credibility and transparency.

The thing is, "remove bylines and metadata" is always a top priority in the click-funnelling shitfeast of modern web design. So the outcome might have had little to do with the people who are being held responsible in today's anguished and angry twitterings.