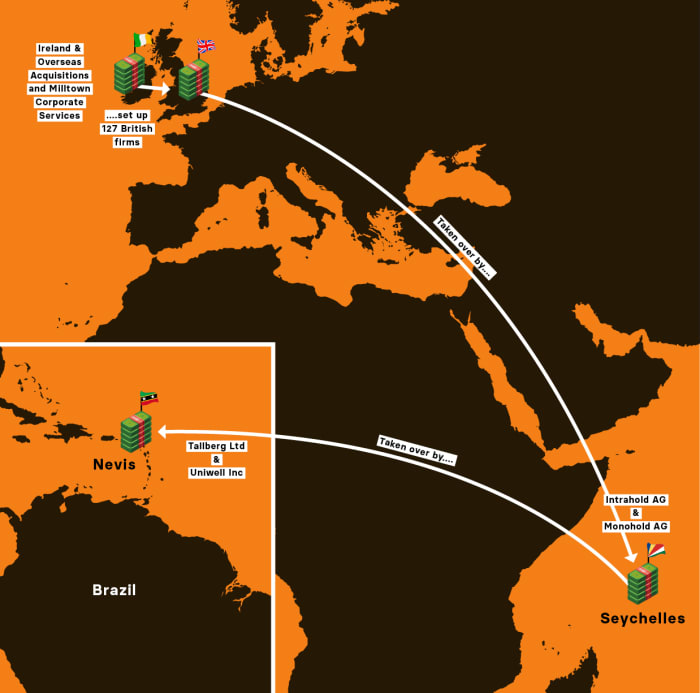 Paul Manafort's money-laundering conviction makes a convenient peg to hang Buzzfeed's investigation into shell companies in the UK off of; and what their excellent reporting reveals is a playground for money-launderers who operate in the most brazen way, using a complex system of shell companies all over the world, but using the UK as the the lynchpin for their schemes.

A string of Conservative Prime Ministers -- David Cameron, Theresa May -- have repeatedly declared victory over money-launderers insisting that they have licked the problem without having to take any steps that would substantially inconvenience the nation's lopsided and massive finance sector.

But as Buzzfeed shows, it's not hard to find convicted money-launderers operating right in the open, engaged in the sloppiest of funny bookkeeping (some of these ghost companies list their 2015 income as £2015, and their 2016 income as £2016, etc etc).

It's common for firms to list their headquarters as anonymous buildings with no signage that allegedly represent the corporate HQ of hundreds of firms through which flow billions of pounds. Buzzfeed untangles a web of companies whose common corporate officer is a dentist in Brussels who disclaims all knowledge of their affairs, though he admits that he signed a lot of papers for friends in Latvia.

The final link connecting the companies is a mysterious figure named Ali Moulaye. He represents the offshore firms behind the network, and paperwork for the 127 British companies bears his name — spelled seven different ways but with the same distinctive signature. Yet his true role has been unclear and his whereabouts unknown — until BuzzFeed News tracked him down in Brussels this month.

Moulaye, 54, hardly fits the mold of a business kingpin running more than a hundred companies. He uses different first names, including Nick and Bahram; works as a dentist; and lives in an unassuming apartment block in Schaerbeek, a multicultural district west of the city, with his wife and two children.

Shown the corporate documents, Moulaye at first claimed not to recognise his signature — despite it being almost identical to that on a courier receipt Moulaye had signed 30 minutes before the interview. Later, he said that his signatures on the company filings were a “forgery”. He insisted, “I have no clue what these companies are, where they are based, and what’s their business.”