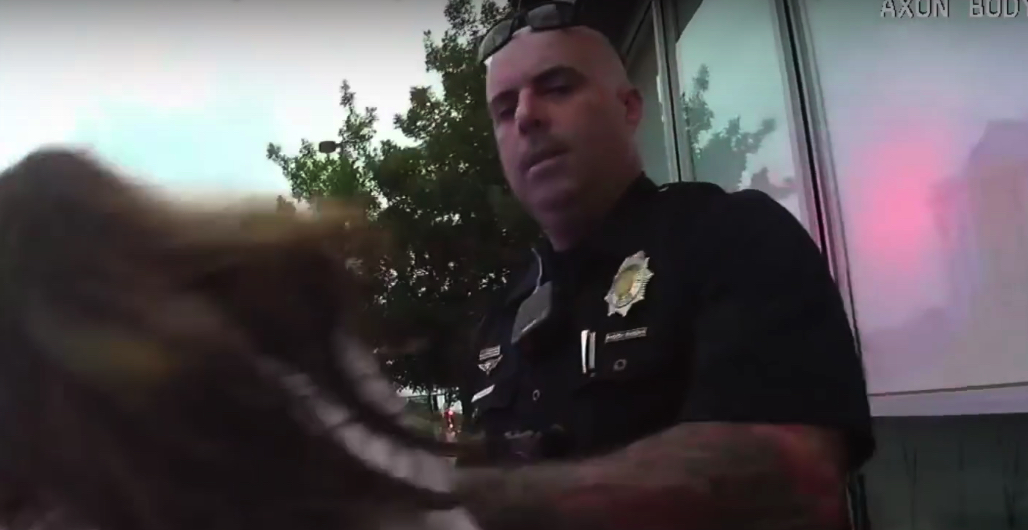 Susan Greene, the editor of the Colorado Independent, was handcuffed and detained by Denver police while attempting to film them near the Colorado State Capitol building. When she points out to officer James Brooks that what she's doing is protected by the First Amendment, he claims that it does not supercede other laws, cuffs her, and orders her to "act like a lady."

Filming police officers in public is legal, and attempts to prevent it are oftentimes a warning that police feel they have something to hide.

Two studies have found that at least 40 percent of police officer families experience domestic violence, in contrast to 10 percent of families in the general population.

District Attorney Beth McCann "last week called Greene to inform her that the D.A.’s office would not be pressing charges against the officers."

Here's the photo Denver cops didn't want Ms. Greene taking, which she published in a post about the incident.

I’d have plenty of colorful things to write about the moment when the officers were pushing me toward the police car and one of them – Officer Brooks, I think – told me to “act like a lady.” Or maybe it was “try to act like a lady.” In any case, I’m curious to hear, after reviewing the body-cam video, Denver police officials explain how exactly a woman should behave on a perp walk after having been blocked from doing her job, obstructed from exercising her First Amendment rights, handcuffed and otherwise manhandled by an ignorant and over-amped police officer and his sidekick.

I’m also curious to see whether this incident will be addressed by Mayor Michael Hancock, who has promised reforms in his wayward Safety Department more times than I care to count. It’s worth noting that in May Hancock made an appearance at the Denver Press Club extolling the value of having a free and “unfettered” press covering the city.