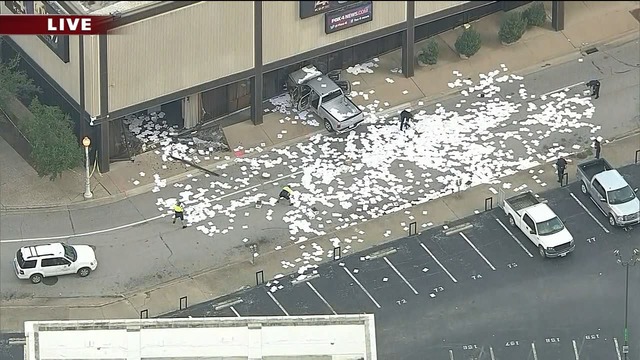 Fox News 4 in Dallas reports that a man crashed his truck into the side of its building at least twice "then got out and started ranting."

A man crashed a truck into the side of our building this morning. He jumped out and started ranting. He’s in custody now but the bomb squad is on its way. He left behind a suspicious bag. Most have been evacuated & a few are working to keep the news on air from a secure location. pic.twitter.com/X3UpLbYk85

FOX 4 Reporter Brandon Todd heard what happened and went to investigate. He saw the man through a window.

Brandon took out his cellphone and started recording the man. When he realized he had an audience he grabbed a few pieces of paper, slammed them up against the window and started pleading his case.

“Originally when he was in the bed of the truck he was yelling out ‘High treason! High treason!’ As he got over to the window he was trying to explain something that involved the Denton County Sheriff’s Department,” Brandon said.