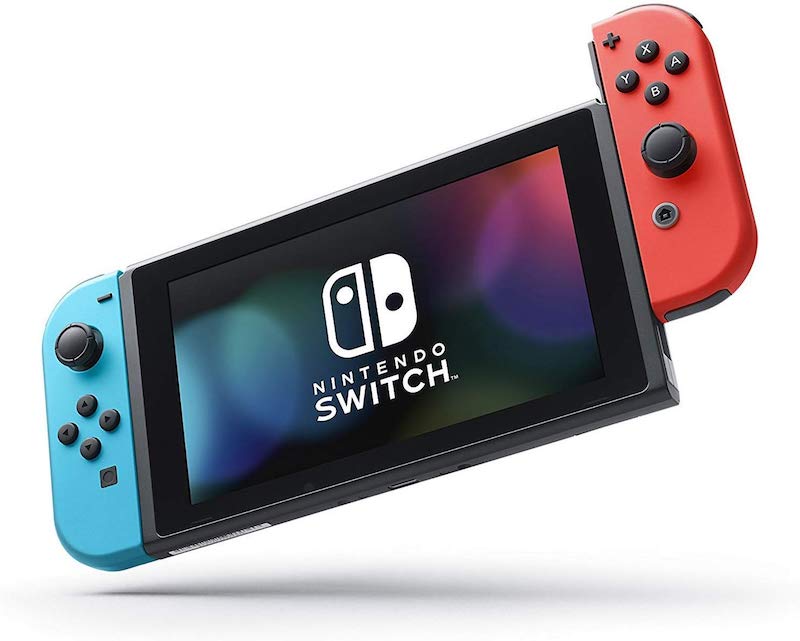 A few months back we bought a Nintendo Switch. The portable console gets shared between a 46 year-old dad and an 11 year-old daughter. The Switch sees a lot of playtime.

We had a long road trip planned, and my daughter wanted to be able to play while we drove. Gymnastics competition season was coming, and I wanted another distraction for the hours my daughter wasn't actually on the floor, or bars or whatever. There were lots of little mildly annoying places in life that felt like they'd be improved by playing Fortnite rather than sitting idly. I let the kid convince me a Nintendo Switch was the way to go.

Initially, I didn't touch the Switch very much and my daughter really loved the new MarioKart 8 and a game called Overcooked 2. MarioKart is MarioKart, she would disappear for hours into her room. The Switch with JoyCons attached is pretty perfect for curling up in bed, under a mountain of blankets and playing games til someone forces you to get up and do something with your life.

Overcooked is a fun puzzle game where you set up a production line and make food for hungry customers. Sort of a high action Lemonade Tycoon meets Tapper. I can churn through levels like butter, but for an 11 year-old the problem solving/puzzle management skills are new and it is fun to watch them develop in my daughter. I think she loves the madcap graphics and action as customers and food start to back up.

Then Fortnite came out on the Switch. I started to carry the Switch with me. The kid is a competitive gymnast, and her gym isn't exactly close to our home. Kiddo practices 3 hours a day 4, sometimes 5 days a week. Driving back and forth doesn't make a lot of sense, so I work out of my car in the parking lot an awful lot (I was working from a close-by BBQ place, but after a while I over-inflated.) Once work is done and I've had a long walk, there is usually 60 minutes or so to kill. Fortnite on Switch is pretty great.

Fortnite on the Switch is very darn close to Fortnite on my Xbox. The screen resolution is less, and the small size screen caused me some worry about my eyes, but once I figured out that taking my glasses off was better than keeping them on, I got into it. The tilt-look screen panning around is very helpful. The JoyCons are completely useable for 45-60 minutes of play in the car. Brightness and sound are adjustable well within what I need to play in moderate sun with headphones on. I usually work on challenges, not try for Solo wins — but I've managed a few of those on the Switch.

Solo wins make me get up and dance. I've literally jumped out of the car and danced around a parking lot.

On a long road trip from San Francisco, CA to Vancouver, Canada the Switch was this summer's most favored toy. Super Mario Odyssey was her game of choice. Donkey Kong Country: Tropical Freeze became mine. Both play exactly as you'd expect; Nintendo's most popular characters on it's flagship platform. The challenge we were really presented with was battery-life. The Switch would slowly charge during play if on the VW's AC, but my USB battery pack wouldn't keep up with it while on, and would charge the device very slowly when not in use.

I would frequently look to play at the end of a long day driving only to find a dead battery. A full battery will usually give us about 75-90 minutes of full screen brightness while playing games on wifi. When not in use and on the car AC, or wall power, the Switch charges back up quickly. Make sure to click the JoyCons back on to the screen, if you were playing with them detached, so everything charges at once.

If I am traveling without the kid it is questionable if I'll drag the Switch along with me. Unlike a Kindle e-reader, the Switch isn't so small that it is no big deal to just leave in my carry-on travel bag. I try to travel pretty light and if I am not going to use it, it is extra weight and junk to have with me. The lack of a decent bluetooth sound solution forces me to carry wired headphones. If I only carry wired headphones, other complications arise. I also haven't found a small enough case to protect it in my bag, yet not be totally bulky. The screen protector I put on it is already chipped.

At home I still play on the Xbox. The screen is bigger, my eyes are happier, the controller is better for my hands. The Switch is surprisingly great for out-of-the-house situations where I'd otherwise be bored, like a gymnastics meet. My daughter plays with it a lot at home, she prefers the in bed and curled up play style to the big screen Xbox.

We've never bothered hooking the Switch up to the TV.

The Nintendo Switch is absolutely the best portable game machine I've ever had. I wish I'd had something like this on road trips with my family, as a kid.