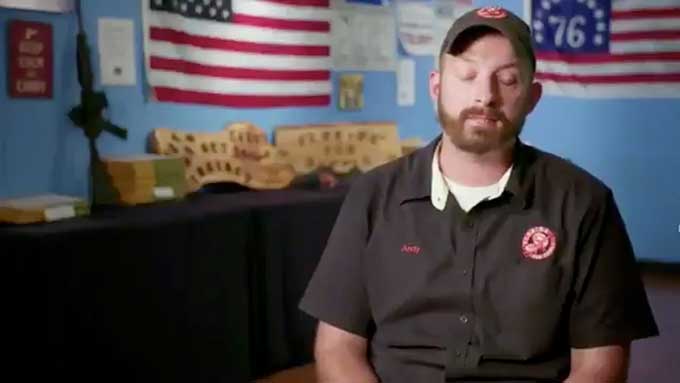 Andy Hallinan owns a "Muslim-free" gun shop in Florida. He agreed to be interviewed for a new documentary about Trayvon Martin, Rest In Power. The interviewer asked Hallinan why he didn't think the Confederate flag is a racist symbol. What followed is one of the greatest self owns of all time. Watch below:

This is just beautiful pic.twitter.com/cOZ3DPXkk2

Hallinan: The majority of people believe that it is a symbol of heritage, that it is a symbol of our history, that people think is associated with the South, and the South was fighting for slavery — that’s a common misconception about what actually took place. When you study the history, that was one thing that the war was about. People don’t go to war for one issue.”

Interviewer: Name three other things the war was about.

Hallinan: Uh, I mean, I’m not a historian. I mean, you’re putting me on the spot for something I — you know.

[a few seconds of silence]

Hallinan: Um, um, the Confederate... the, uh, um... in general, the war was about tyranny.

Interviewer: What is tyranny?

Hallinan: Tyranny is any time a government overreaches, and they control a life too much.”