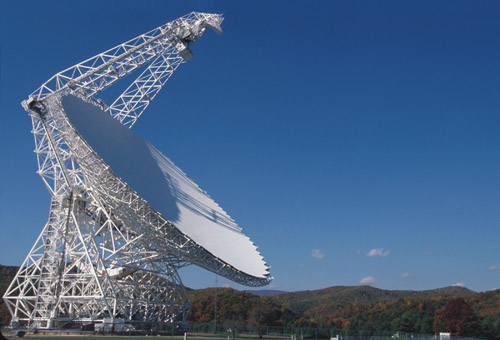 Researchers from extraterrestrial research initiative Breakthrough Listen, the SETI Institute, and UC Berkeley used machine learning to detect mysterious repeating radio bursts from a galaxy 3 billion light years from Earth. As of now, the source of the fast radio bursts (FRBs) is unknown and, yes, the bursts "could be the signatures of technology developed by extraterrestrial intelligent life," according to the scientists. From the SETI Institute:

In August of 2017, the Listen science team at the University of California, Berkeley SETI Research Center observed FRB 121102 for five hours, using digital instrumentation at the GBT. Combing through 400 TB of data, they reported (in a paper [pdf] led by Berkeley SETI postdoctoral researcher Vishal Gajjar, recently accepted for publication in the Astrophysical Journal) a total of 21 bursts. All were seen within one hour, suggesting that the source alternates between periods of quiescence and frenzied activity.

Now, (UC Berkeley doctoral student Gerry) Zhang and collaborators have developed a new machine learning algorithm, and reanalyzed the 2017 GBT dataset, finding an additional 72 bursts that were not detected originally...

Additional FRB research may provide clues about whether or not they are signatures of extraterrestrial technology.