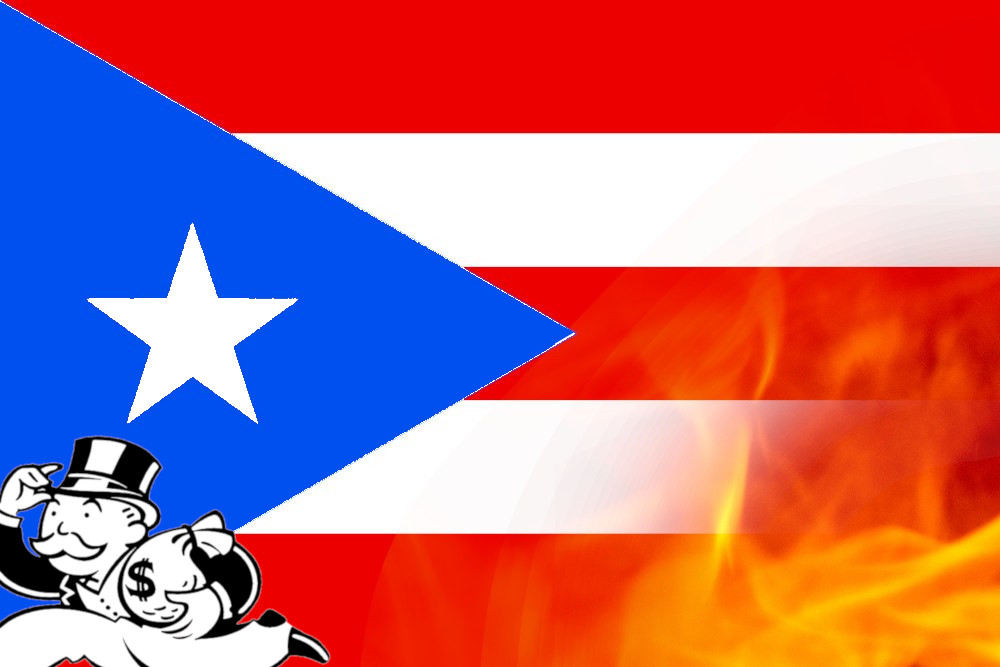 Since the US conquered Puerto Rico in the Spanish-American war, it has treated the island as a playground for the rich, with all kinds of sweetheart tax-deals and regulatory exemptions that lured some industry and some rich people to the island, but which kept it from ever developing its economy and infrastructure to American mainland standards.

The latest iteration of this was the 2012 Act 20 and Act 22, which lowered the tax rate for "service-exporting companies" (finance, basically) to 4% and which exempts individuals from tax on capital gains, interest and dividends -- the way that rich people earn their money.

This has made Puerto Rico into a playboy's paradise, full of luxury resorts and gate-guarded communities where native Puerto Ricans can find the odd job as a servant or administrator.

Meanwhile, the island groans under the largest debt crisis in municipal bond history, with more than $100 billion in debts and unfunded liabilities, created by the structural inequities of colonial rule and engineered by the finance industry, and its democratic government is now subservient to presidentially appointed administrators charged with keeping bondholders whole, by any means necessary, including cuts and sell-offs that left the island terribly vulnerable to hurricanes and other disasters.

3,000 funerals later, Puerto Rico is a symbol of looter capitalism, where lethal incompetence, deliberate blindness, crony capitalism, and ethnic cleansing are the only official response to natural disasters that plunged American citizens into months of darkness, the second-longest power-outage in human history.

For a good, rounded overview of the connection between colonialism, finance and the looting of Puerto Rico, don't miss this week's Intercepted podcast, which also highlights the island's long history of resistance.

The Act 20/22 tax-dodgers living the high life on Puerto Rico are quite a bunch, as profiled by Jesse Barron in GQ. Thanks to governmental indifference, they easily dodge the minor regulatory burdens they are supposed to endure in exchange for their tax holidays, while partying, being waited on hand and foot, bloviating about the "moral duty" to avoid taxes, and enjoying all kinds of perks, like living in a $2.6M mansion that is taxed at $4000/year because the Puerto Rican government hasn't reassessed its luxury property since 1957.

Tenenbaum's lunch date was a scout from a hedge fund who was here to meet with the Puerto Rican authorities about the government's bond debt. Most of the people who spoke with me for this article seemed unsure of how to talk to a reporter, and it was not uncommon to spend a relaxed afternoon with a person and receive several urgent messages the next day. Marc Bejarano, who works at a local start-up incubator, spoke to me on the phone for an hour, then texted to ask if we could “collaborate” on this article because, he explained, “it'll be hard to write a piece with this subject matter in such a way as to not lead the reader to draw certain conclusions.” This scout belonged to a different stratum of financial player. No sooner had the car door closed than she asked, “Are we on record?” When I said we were, she smiled, touched her sunglasses, and stared silently out the window.

I tried to imagine the city through the eyes of this scout and her hedge-fund clients. As soon as I did, Robb Rill and Mark Gold and even the acts themselves began to seem like a sideshow to what was really happening in Puerto Rico. There were forces operating here that had no interest in the property taxes at the Ritz or which pool you swam in on Saturdays. The real money talked directly to the government about the power grid and the outstanding debt, issues that could make or break the entire economy. The acts only reflected reality: Government is a business, and its most important customers are the rich.

“At some point soon, we're going to have 10,000 individuals,” José Pérez-Riera, the government secretary who first conceived of the acts, told me. “Just imagine the amount of development. This is the beginning of the story, if you will.”