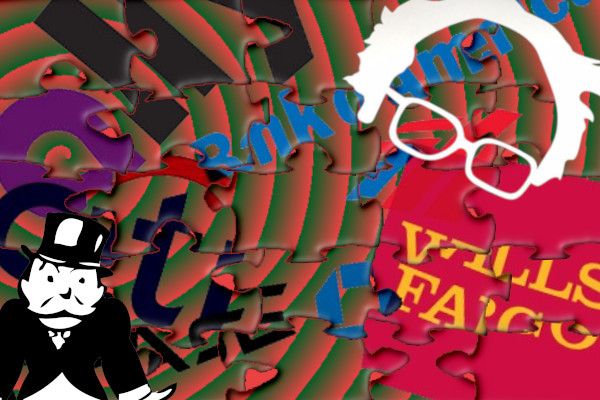 In 2008, the Bush and Obama administrations both argued that they had a duty to transfer more than $700,000,000,000 of American taxpayers' money to the largest banks in the country, because these banks were "too big to fail" and allowing them to collapse would do much more harm than a mere $0.7 trillion subsidy.

But of course, that wasn't their only option. As Matt Taibbi argued persuasively in his brilliant history of the crisis and its aftermath, The Divide, a bank that is on the verge of collapse, come begging to the US government for hundreds of billions to stay afloat, is a bank that is intrinsically regulable.

If the bank needs government aid to survive, it will accept any terms that the government offers. It is over a barrel. And a perfectly obvious, legitimate demand that governments can make of banks that are "too big to fail" and that need hundreds of billions to keep them from tanking the real economy is that they get smaller. As in, "Here are the billions you need, and you'll get them just as soon as you make a binding promise to divest yourself of all those competitors you gobbled up, breaking up the giant bank that poses a systemic risk to the nation into a bunch of smaller banks whose mismanagement will not destroy the country."

Bernie Sanders has spent his whole political career warning that relaxation of financial rules would make banks too big to fail: in 1994, Sanders was the only No vote on the Riegle-Neal Interstate Banking and Branching Efficiency Act, which fired the starter pistol on financial mergers and acquisitions. He voted against the Gramm-Leach-Bliley Act, which dismantled Glass-Steagall and supercharged the recklessness and anticompetitiveness and crookedness of the finance sector.

Now, Sanders has joined with Rep. Brad Sherman (D-CA) to introduce the Too Big to Fail, Too Big to Exist Act, which mandates breakups for any bank with assets equal to or larger than 3% of the country's GDP.

Sanders and Taibbi discuss the bill in Rolling Stone, explaining how reckless financial deregulation produced "too big to fail" and its attendant, deadly oligarchy -- and how "too big to exist" is the natural policy response to the problem.

For Sanders, however, the extreme concentration of economic power is a problem even if there isn’t another collapse in the next 10 minutes.

“It’s a movement to an oligarchy in this country,” he says. “Are we comfortable as a nation with a situation in which six financial institutions have assets equivalent to 54 percent of the GDP? What kind of economic power is that, what kind of political power is that?”

When work began in the summer of 2009 on the Dodd-Frank financial reform act, which was to be the signature legislative response to the crisis, everyone with a brain on the Hill knew two things.

First, the by-far biggest problem that needed to be addressed was the Too Big To Fail issue. And second, any meaningful effort in that direction would be a complete political non-starter.