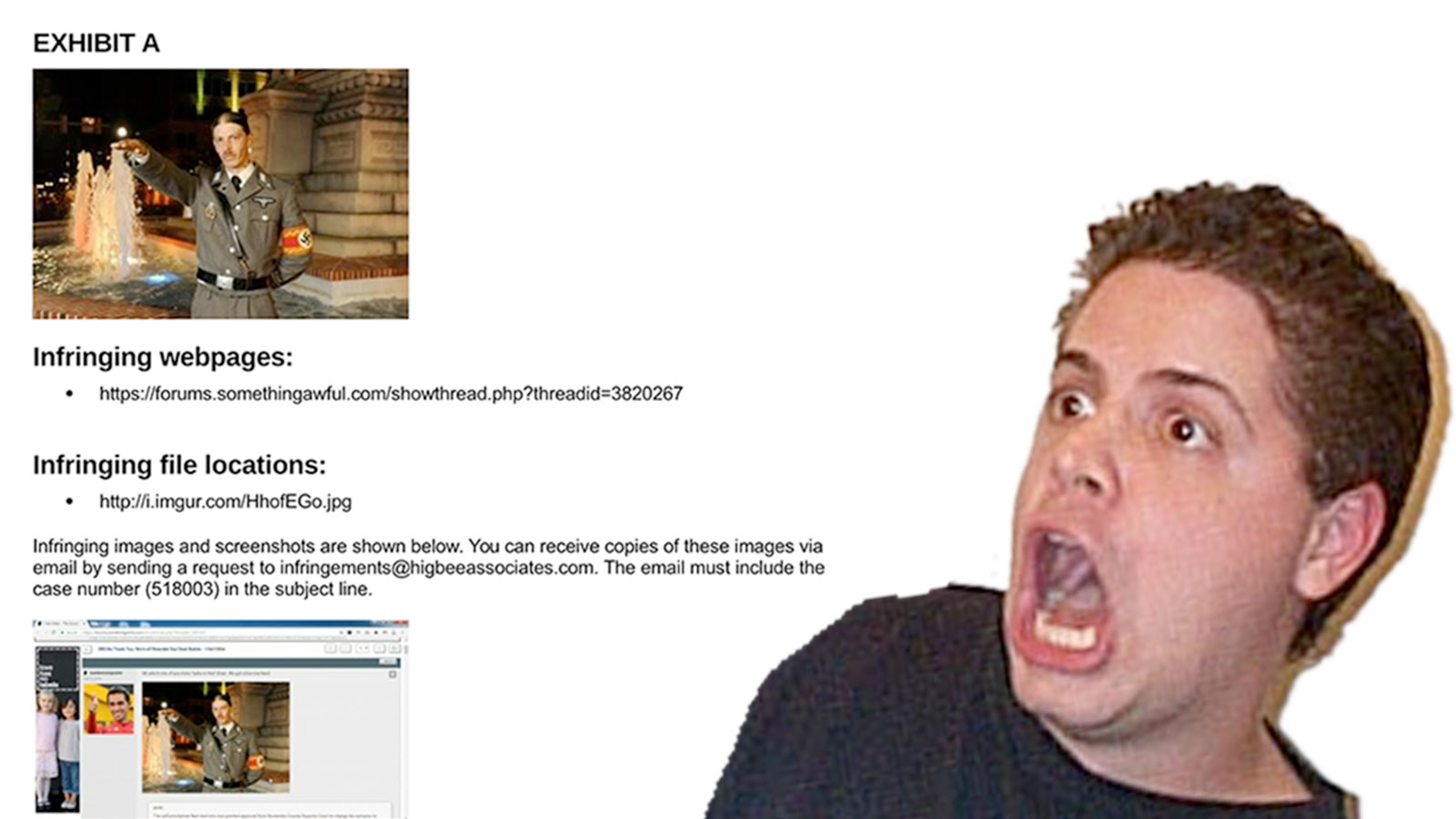 Christopher Sadowski is, his lawyers submit, a most accomplished photographer of... Hitler admirer Heath Campbell? The New York-based shooter is threatening to sue the website Something Awful over a photo of the nazi spotted in its forums unless they pay $6750.

The unauthorized use of my client's work threatens my client's livelihood. While Christopher Sadowski,[sic] does have the right to bring a lawsuit for damages, my client is willing to settle this in an amicable way, out of court and without a lawsuit. I was asked to contact you and see if we can negotiate a settlement and save everyone the stress and costs of going to court.

It turns out, however, that the image isn't actually posted on Something Awful. It's hotlinked from another website, Imgur, which is the image's actual host and the one providing the embedding snippet. It's still there. Sadowski's lawyers, Higbee & Associates, haven't figured it out—or maybe they have, but removing the image isn't the business plan.

This garbage dicked law firm generates nearly $5 million a year by encouraging photographers to sign up with their company, then performing a reverse image search for anything matching their client's submitted photos. An automated system then flags the suspected offending site, spits out a super scary legal threat based off a template, and delivers it to the site owner. Upon receiving the notice of possible legal action, many victims freak out and pay these idiots the stated arbitrary amount of cash, under the looming threat of being taken to court for $150,000. Higbee and Associates operate one of the biggest dirtbag law firms to ever pollute the internet, preying on fear and dealing in bulk.

And he responds thus:

I have an even better idea: I'm not going to pay you a fucking dime and you can go fuck off to hell for eternity because I am absolutely in no way responsible for images hosted by a third party service, in this case Imgur. Go fuck yourselves and prey on some other website that hasn't been around for two decades and knows damn well what their legal responsibilities entail, and what they're responsible for. Your entire law firm is a straight up piece of flaming shit that tries to intimidate folks with EXPENSIVE LEGAL THREATS in the hope that your extortion scheme will work on some of them. I am not one of those people. So I cordially invite you to take your pdf, print it out, and ride it like a sybian until the cows come home. Then I invite you to fuck the cows as well.

Kyanka's not exactly Private Eye here, but you can't say Higbee doesn't have it coming.

A follow-up from from Higbee's Shauntece Laurant said they now considered it "willful infringement," that Kyanka's response was "comically ignorant," and asked him to "advise your affiliation with imgur.com."

He sent Laurant more insults and, after further similar exchanges, is "currently waiting in a holding pattern", presumably until someone at Higbee familiar with Imgur, hotlinking, CDA § 230, and relevant case law is forced to look upon what they have wrought.