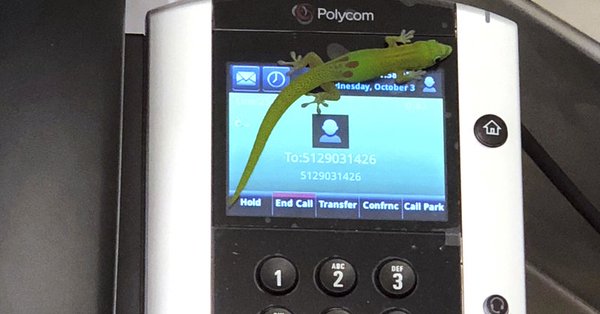 At a The Marine Mammal Center in Hawaii, a cute little gecko butt-dialed random people ‘a bazillion’ times before a human figured out what was going on.

Technically it wasn't a butt-dial. It was a gecko foot dial.

Excerpt from the story first told by the human it kinda happened to, Dr. Claire Simeone:

Marine mammal veterinarian Claire Simeone was at lunch when she got a call from Ke Kai Ola, the Big Island hospital where she’s director. There was silence on the other end. Nine more silent calls followed. Fearing a seal emergency, she rushed back.

She wasn’t the only one getting calls, and people started asking why the hospital was calling non-stop.

Trying figure out why a “bazillion” calls were made from one line, she called the phone company and a rep tried to talk her through finding a possible line on the fritz. She walked into a lab and found the culprit.

And that's when she saw the gecko perched on a phone, making calls to everyone in the telephone's recent call history with “HIS TINY GECKO FEET,” as she tweeted the next day.

“You are not going to BELIEVE this story,” she said.

Dr. Claire Simeone‏ [@Claire_Simeone]:
'THERE IS A GECKO SITTING ON THE TOUCHSCREEN OF THE PHONE, MAKING CALLS WITH HIS TINY GECKO FEET!!!'

So yesterday I started getting calls at our hospital, #KeKaiOla @TMMC. I was getting lunch, so I thought maybe someone had a seal-related question. I picked up. Silence. pic.twitter.com/yX6aziwoHz

More calls. NINE calls in 15 minutes. I start to panic a bit, and drive back to the hospital. Seal emergency? I am on it. pic.twitter.com/qtjc2ZK68d

I arrive. All is calm. Did anyone call me? No one did. I get another call. It’s coming from INSIDE the hospital. So I call @HawaiianTel to check it out. Phone on the fritz? Meanwhile, several other people call the hospital, asking WHY WE ARE CALLING THEM INCESSANTLY? pic.twitter.com/r59Hoxgk1z

Very nice @HawaiianTel man says it might be an issue with one of our phones, or some of the software. He confirms that, yes, a bazillion calls are coming from one line. But I look at our office line. It’s not that one. He asks me to look around to find the problem line. pic.twitter.com/QcrMjVCG4X

THERE IS A GECKO SITTING ON THE TOUCHSCREEN OF THE PHONE, MAKING CALLS WITH HIS TINY GECKO FEET!!! This gecko has called me 15 times, and everyone in our recent call list. *Actual photo of telemarketer* @TMMC @GEICO @HawaiianTel pic.twitter.com/USyKeOiDbE

I had to apologize to @HawaiianTel man, who said “well, I haven’t heard that one before.” I had to send out a note to all of our staff and volunteers, who may have received telemarketing calls. I immediately hired gecko. pic.twitter.com/4xOYeg7pZ0

Learn more about The Marine Mammal Center (@TMMC) and the work we do at Ke Kai Ola, our Hawaiian monk seal hospital, at: https://t.co/WC7GsIjeBd