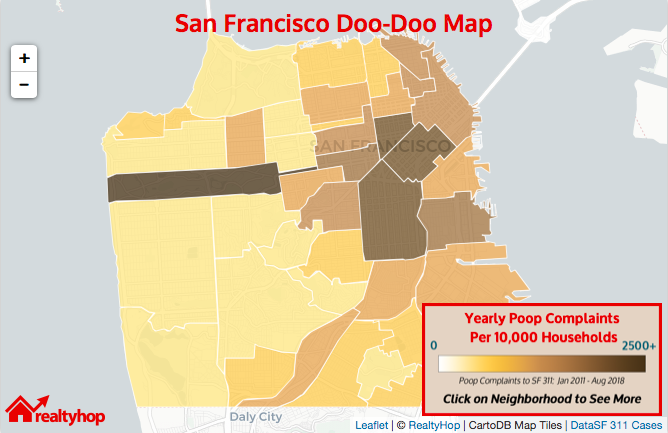 Over 20,000 reported cases of crap on the streets of San Francisco wins it a funny smelling crown.

San Francisco has been named the 'doo-doo' capital of the United States with 20,899 poop complaints reported in 2017, according to RealtyHop.

RealtyHop did a comparison of 311 poop complaints in Chicago, New York City, and San Francisco.

While 2017 was the worst year on record in San Francisco, research shows that 2018 is on track to beat that.

The 'Doo-Doo Map' from RealtyHop shows the which neighborhoods have the most poop complaints in the city.

Don't blame the dogs, tho:

San Francisco Department of Animal says that the city has 120,000 dogs, but the real issue is the number of homeless people without shelter.

The research conducted says there is no correlation between a neighborhoods home value and poop complaints.

According to the study, the poop crisis in San Francisco reflects a social crisis and the problem has continued to increase since 2011.