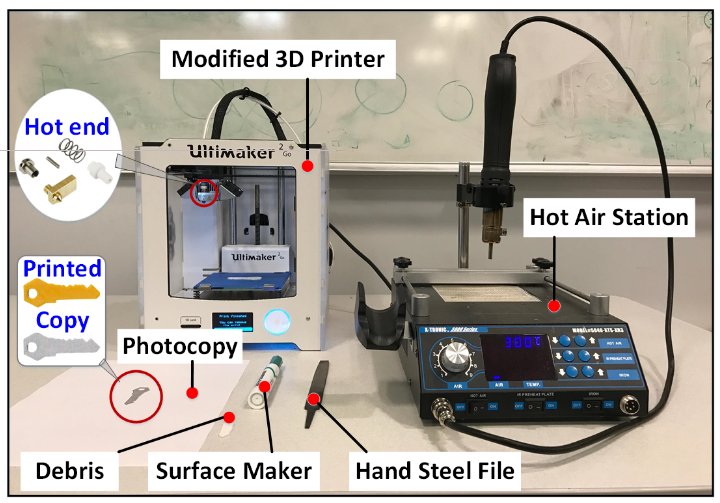 In PrinTracker: Fingerprinting 3D Printers using Commodity Scanners (Scihub mirror), a paper to be presented at the ACM SIGSAC Conference on Computer and Communications Security conference in Toronto this month, a group of U Buffalo and Northeastern researchers present a model for uniquely identifying which 3D printer produced a given manufactured object, which may allow for forensic investigators to associate counterfeit goods, illegal guns, and other printed objects with the device that manufactured them.

The technique uses "slight imperfections" in infill created by the "printer's model type, filament, nozzle size and other factors" to uniquely identify a printer's output.

The technique examines the output of stereolithography and extrusion printers, which produce lower-resolution, more fragile output than the more expensive selective laser-sintering. It's not clear whether a printer could be modified between prints to change the "fingerprint" it creates when it prints -- this could be a relatively easy countermeasure to defeat the forensic technique.

With a common scanner, the researchers created digital images of each key. From there, they enhanced and filtered each image, identifying elements of the in-fill pattern. They then developed an algorithm to align and calculate the variations of each key to verify the authenticity of the fingerprint.

Having created a fingerprint database of the 14 3D printers, the researchers were able to match the key to its printer 99.8 percent of the time. They ran a separate series of tests 10 months later to determine if additional use of the printers would affect PrinTracker's ability to match objects to their machine of origin. The results were the same.

The team also ran experiments involving keys damaged in various ways to obscure their identity. PrinTracker was 92 percent accurate in these tests.