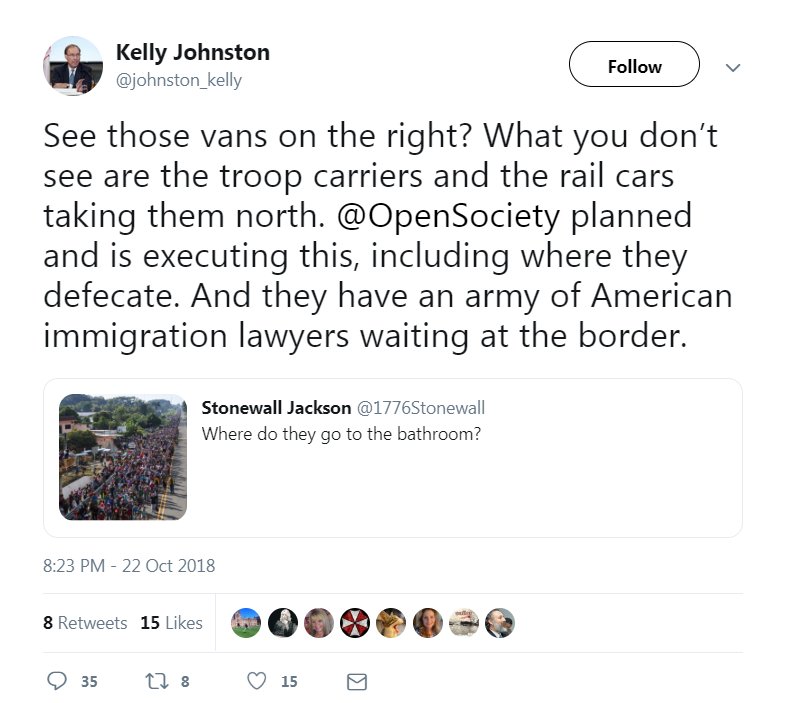 You guys, when the weird gets weird on top of the weirdest weird, you have this kind of story. It's really weird.

Campbell Soup Company was today forced to deny claims tweeted by lobbyist Kelly Johnston that billionaire philanthropist George Soros' foundation is helping the so-called "caravan of migrants" who are walking from Central America to the United States border.

Kelly Johnston is Campbell's vice president of government affairs. On Monday, he tweeted that the Open Society Foundation arranged for "troop carriers" and "rail cars" to support the loosely organized group of asylum seekers who are walking north, and suffering greatly.

Vice President of Government Affairs for @CampbellSoupCo @johnston_kelly (a former Secretary of the US Senate under Bob Dole) spreading conspiracy theory about @GeorgeSoros' @OpenSociety planning & executing migrant caravan "including where they defecate." https://t.co/vDQvw4mUwh pic.twitter.com/NdLnpGQ9uE

"The opinions Mr. Johnston expresses on Twitter are his individual views and do not represent the position of Campbell Soup Company," a company spokesperson says.

Someone delivered a bomb to one of George Soros's homes in New York earlier this week, and a person who worked there opened the package and could have been killed. This kind of inflammatory hate speech has consequences.

Vice President of Government Affairs for @CampbellSoupCo @johnston_kelly (a former Secretary of the US Senate under Bob Dole) spreading conspiracy theory about @GeorgeSoros' @OpenSociety planning & executing migrant caravan "including where they defecate." https://t.co/vDQvw4mUwh pic.twitter.com/NdLnpGQ9uE

I've called @CampbellSoupCo PR & @johnston_kelly asking for evidence of this claim, & also whether it reflects Campbell's corporate position. I will update if I hear back. Johnston is currently registered to lobby for Campbell on trade & agriculture issues https://t.co/W2ppfkBJJm

RESPONSE FROM CAMPBELLS SPOX: "The opinions Mr. Johnston expresses on Twitter are his individual views & do not represent the position of @CampbellSoupCo."
MY FOLLOW-UP: What is the company's position on the subjects raised by @johnston_kelly's tweet?
AWAITING RESPONSE.

The Open Society Foundations, which seeks to promote democracy around the globe, dismissed the tweet as false.

"Neither Mr. Soros nor Open Society is funding this effort," Open Society tweeted on Tuesday. "We are surprised to see a Campbell Soup executive spreading false stories."
"We do support the historic U.S. commitment to welcoming people fleeing oppression and violence in their homelands," Open Society added.

A caravan of more than 7,000 migrants formed in Honduras more than a week ago. The migrants, who say they are fleeing poverty and violence, are making their way through Mexico to the US border.

Some other public figures and politicians have suggested, without evidence, that Soros is funding the caravan.