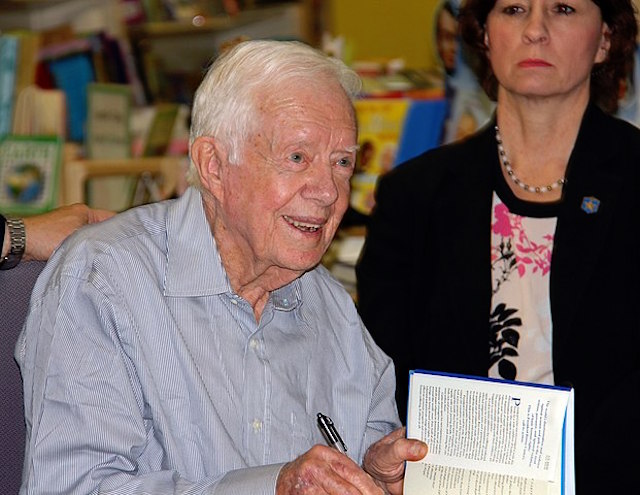 "This runs counter to the most fundamental principle of democratic elections — that the electoral process be managed by an independent and impartial election authority."

Carter is far from the only prominent figure to raise concerns about Kemp's role as both candidate and referee in next week's election — and last year's voter purge is not the only move that has gotten Kemp embroiled in controversy.

An APM Reports investigation found that removals have spiked during Kemp's tenure overseeing Georgia's election process. More than 1.6 million names were removed from the state's rolls in the past decade, including his eight years in office.

And a half-dozen civil rights groups recently sued the secretary of state over the delay of some 53,000 voter registration applications, which his office has placed on hold citing questions about the applicants' citizenship status. According to the AP, nearly 70 percent of those pending registrations came from African-Americans.

In a continuation from Trump’s Do-As-I-Say-Don’t-Say-As-I-Do approach to mail-in voter ballots, the Republican National Committee has sued the state of California in an effort to stop their vote-by-mail outreach ahead of November’s election. From CNN: The suit comes after California Gov. Gavin Newsom, a Democrat, announced this month that the state would move to encourage […]