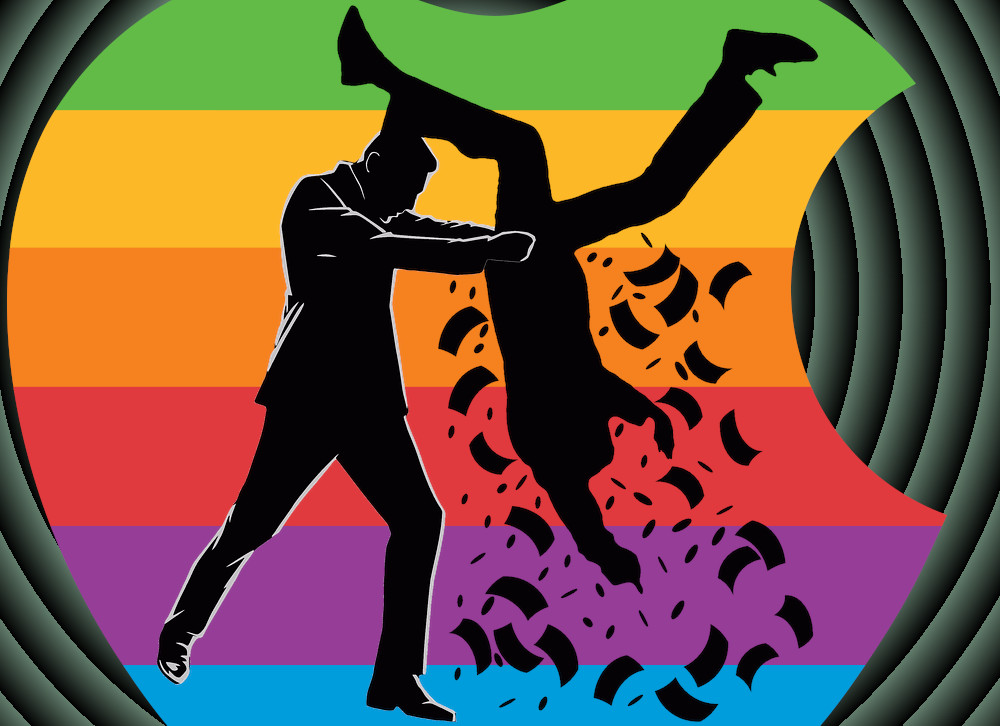 Apple just had a really poor Q3 earnings report, with hardware sales falling off as people figure out that they just don't need to get a new phone every year or so; writing in Bloomberg, Leonid Bershidsky tries to soothe investors by pointing out that Apple is still seeing growth in "services" and that there's plenty more growth to be realized there.

Bershidsky is refreshingly honest in his description of these services: he refers to repairs, sales through the App and Itunes stores, and cloud services as "collecting rent" on Apple customers and its suppliers.

As Bershidsky points out, long-term Apple users are rather locked into its ecosystem by the tedious and potentially risky process of extracting their photos, music, etc to a rival platform. That means that the suppliers of things like music, ebooks, and videos are also locked into Apple's stores, unlikely to win a battle to establish rival stores that interoperate with Apple's Itunes and other apps, but which take a smaller commission on the sale of their products. Apple has inserted itself into the transactions for copyrighted works for the foreseeable future, passively creaming off a substantial portion of the profits from the sales not because their store is the best, but because they have used DRM and other proprietary tactics to lock out competitors.

A Goldman Sachs report suggests that Apple aggressively turn the screw on the rent-collecting end of its business, using bundling and anti-competitive retail tactics to crush Dropbox and other cloud providers currently serving Iphone owners.

The kicker to the piece comes in the final graf: "Rent extraction from a user base that finds it hard to go away may sound a bit like extortion. But it's more honest and upfront than extracting data from users in ways they often don't understand and then making money off the data, as Facebook does."

The fetishization of paid services as a panacea for the woes of surveillance capitalism mistakes the nature of the problem. Google doesn't spy on us like crazy because they're creepy spies: they spy on us like crazy because the lack of competition lets their creepy spy-nature run amok, and the size of Google and its surveillance capitalism breathren allows it to purchase regulation and laws that fail to meaningfully limit surveilling us (if we were serious about regulating privacy, we'd create really serious statutory damages for breaches, far beyond even the dreams of Ron Wyden).


The harms of being "the product" in monopoly walled-garden capitalism are different in kind, but not degree from being "the product" in monopoly surveillance capitalism: you pay lots more, while the world drowns in e-waste. Your access to artistic works is limited by arbitrary and self-serving ways — and walled gardens are an autocracy's best friend.

(To say nothing of the other problem with "everything should be a paid service": in a grossly unequal world, the idea that charging to participate in discourse will fix discourse is radioactively wrong, a bad idea that's visible from orbit — imagine a world where the vast majority either have to ration their participation, or use platforms subsidized by 1-percenters who reserve the right to kick you off their services for suggesting limits on looting and exploitation)

What if, instead of forcing us to choose between monopoly surveillance capitalism and monopoly walled-garden capitalism, we held out hope for a world where we smashed the monopolies. Made them paid their taxes, made them divest of the competitors they gobbled up, cut them down to a size where they could no longer dominate the legislative and regulatory processes.

Because, after all, even with its weak growth figures, Apple is still a vastly profitable company. Being forced to give up on blocking competing stores, service, parts, and add-ons would not put the company out of business: it would merely shave a few points off the its quarterly profits — while diverting that income to other companies, from the small mom-and-pop service depot on your corner to the indie app vendor who could sell software to Ios users direct and pocket the 30% Apple would have creamed off of their margin.

Rent extraction from a user base that finds it hard to go away may sound a bit like extortion. But it's more honest and upfront than extracting data from users in ways they often don't understand and then making money off the data, as Facebook does. That honesty is in itself a competitive advantage for Apple as it gradually reimagines itself as more of a services company. Now, the challenge is to grow the services offering fast enough to make up for potential iPhone revenue losses; gadget prices cannot keep going up forever without hurting the top line, and in the end, a phone is just a phone. We only need it to gain access to all the nice digital stuff out there.

Apple Used to Be an Inventor. Now It's Mainly a Landlord. [Leonid Bershidsky/Bloomberg]