This artist uses jigsaw puzzles, with the same die cut pattern, to make these terrific mashups 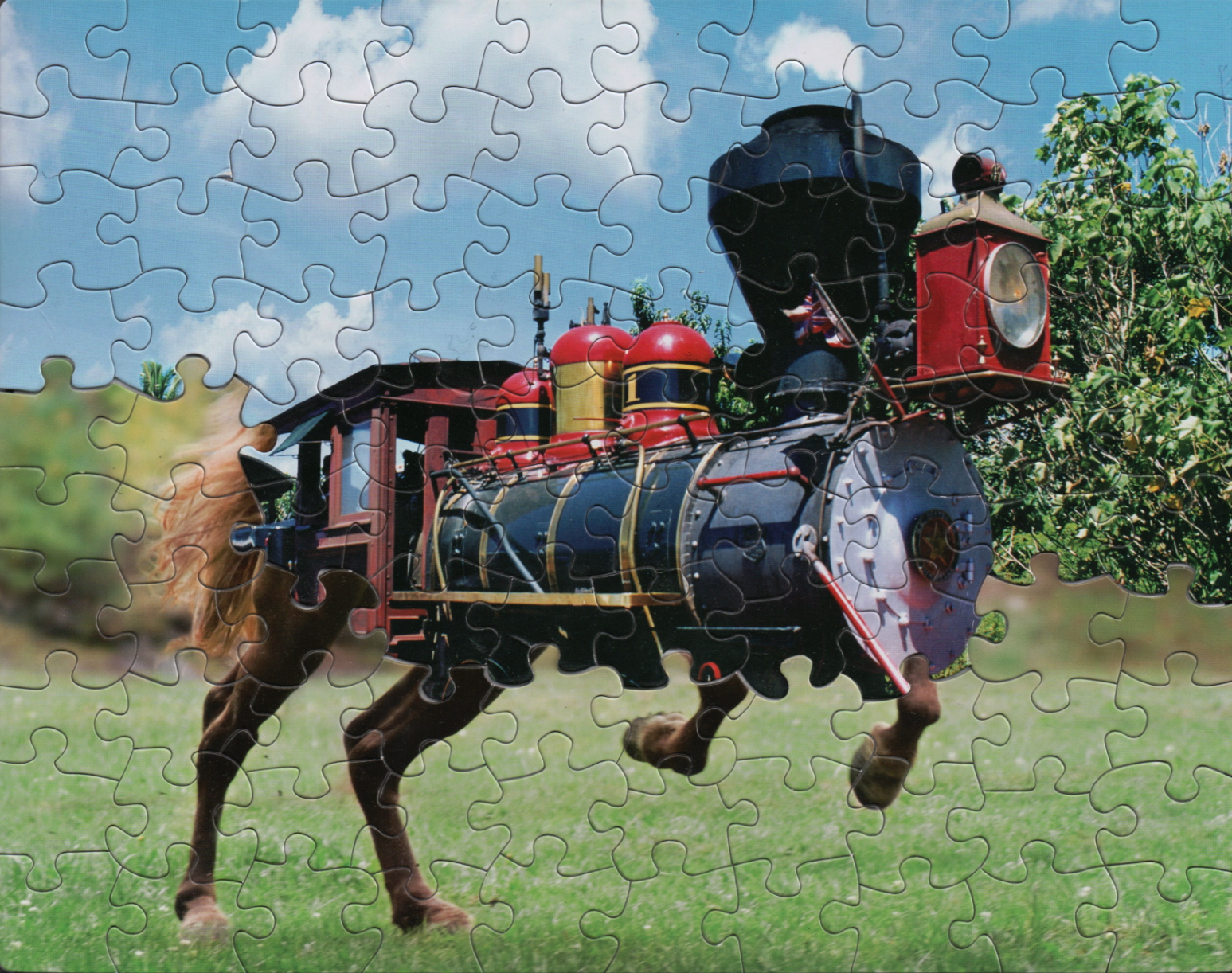 Oh boy, I think I have a new hobby. I've just learned that you can combine puzzles, that have the same die cut, to make really awesome pieces of art. It had never occurred to me that manufacturers of mass-produced puzzles cut different puzzles of theirs in the same way, making the pieces interchangeable. It makes complete sense, of course, but my mind is still blown!

I learned about the art of "puzzle montage" from one of the readers of my inbox zine, Marcia Wiley (she's the gal in Seattle who's fixing up that cool old Checker Cab). She was visiting the Bay Area and we met up for the first time this past Friday. That's when she told me about her friend Tim Klein, who makes incredible puzzle montages. I'm excited to share his work with you.

In an email exchange, Tim told me that he learned about puzzle montages from the man who first made them, art professor Mel Andringa of Cedar Rapids, Iowa, "As far as I know, he and I are the only artists ever to pursue it seriously. And I think he's moved on to other things nowadays, so I may be the sole surviving practitioner."

And this is what Tim shared with me about his process:

...By selecting pieces from two or more compatible puzzles, I assemble a single "puzzle mashup" with surreal imagery that the publisher never imagined.

Sometimes the results are merely chuckle-making, such as my combination of King Tut's burial mask with the front of a truck, which I call "King of the Road". But my favorite montages are ones in which the whimsical is tinged with something a bit deeper, such as "The Mercy-Go-Round (Sunshine and Shadow)", in which a fairground carousel whirls riders around a church from the light to the dark and back again -- or "Surrogate", in which a strange hybrid of beer can and teddy bear opens its fuzzy arms and tells you to "consider yourself hugged".
[editor note: "Mercy", not "Merry"]

The imagery in jigsaw puzzles published nowadays tends to be very busy, often consisting of densely-packed collages constructed with Photoshop. But for my purposes, I favor puzzles from pre-digital years, when the picture was typically a photograph of a single subject, such as a galloping horse or a ballerina or the Empire State Building. As I visit thrift stores and garage sales in search of vintage puzzles, I sometimes feel like an archaeologist, taking great pleasure in discovering and "reconstructing" strange, shattered images whose shards have been languishing in suburban game closets for decades.

Take a look at some of his work (click to embiggen) and then go here to see the rest and to read Tim's notes about the specific pieces:

So, yeah, I think I have a new hobby. In fact, I just dug out these two puzzles out of the closet. I know, they're "busy" and probably 'shopped but I still want to give it a go.