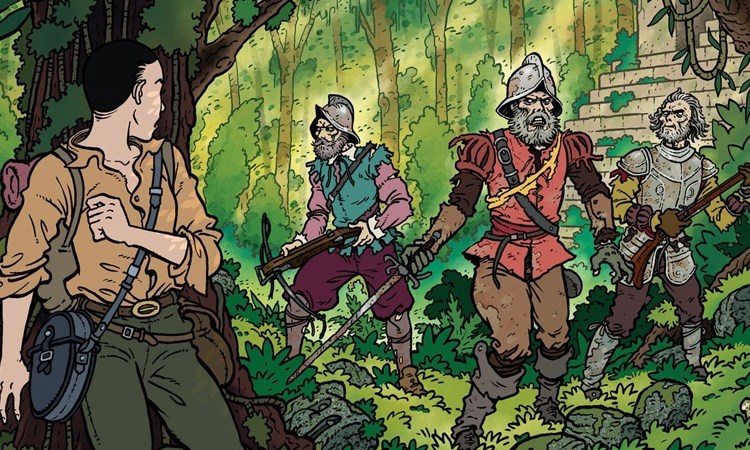 Strontium Dog
Warlord Games, $63, 2-4 players, Ages: 12+
In this skirmish game from Warlord, you play the mutant search and destroy agents, the Strontium Dogs, from the pages of the venerable UK comic magazine, 2000 AD. Designed by the masterful Andy Chambers (Warhammer 40K, Battlefleet Gothic, Blood Red Skies), the game pits the Dogs and their mutant, pirate, and renegade bounty against each other as the two forces duke it out across the galaxy. The very well put-together two-player starter set includes a 122-page rule book, a scenario book, 8 metal miniatures, dice, cards, and other components. The set even includes some cool laser-cut MDF terrain. I love when games include terrain, but you don't often see it and rarely in a game that's not well over $100. Here's a video of Andy Chambers himself describing Strontium Dog.

Terrain Crate
Mantic Games, Prices Vary
After a very successful Kickstarter campaign (which I backed), Mantic has now released a broad range of affordable fantasy and sci-fi terrain pieces under the Terrain Crate name. Each crate is themed (Dungeon, Battle Field, Dark Lord's Tower, Starship Scenery, Industrial Zone) and includes a generous amount of highly-detailed plastic scenery. The pieces are designed to be used as-is and they also paint up like a charm. I love playing RPGs and tabletop games with lots of evocative scenery and terrain, so I have always wanted a terrain collection this extensive, this affordable, and this well done.

Lost Expedition: The Fountain of Youth (& Other Adventures)
Osprey Games, $12, 1-6 players, Ages: 14+
Lost Expedition was one of my favorite games of 2017. It's quick and easy to get into and everyone I've played it with is as excited by it as I am. It has gorgeous artwork reminiscent of Hergé's Tintin, and through a very simple cooperative card game, you are quickly immersed in a white-knuckled fight for survival that will leave you batting away imaginary mosquitoes and army ants and wiping sweat from the pith helmet that you're not actually wearing. I was thrilled to hear that Osprey was releasing an expansion and I was not disappointed when I finally got hold of it. This handsome boxed set of cards includes a new (and treacherous) mountain path to the lost city, new companions and guides you can hire to join your expedition, a were-beast that haunts the jungle, and a set of Fountain of Youth (gone horribly wrong) cards that you can shuffle into your Adventure deck to make things more interesting. And dangerous. You can add as many of these expansion decks as you like to your play deck. They add new levels of difficulty and new challenges to the game. You thought your expedition team died a lot in Lost Expedition. Just shuffle some of these nasties into your deck and see how long you last.

Gaslands: Time Extended
Gaslands continues to be my favorite tabletop miniatures game. The creator of the game, Mike Hutchinson, has been releasing a series of rules tweaks, upgrades, and campaigns in free PDFs, called Gaslands: Time Extended. There's some really cool content here and awesome pictures of converted combat cars contributed by the Gaslands community.

Mad Cars from Green Miniatures
Gaslands has also inspired a growing 3rd party market of templates, dice, terrain, and other game parts and accessories. There are also a number of makers/sellers who create 3D-printed, metal, or resin-cast parts to use in Gaslands car conversions. One of the few sellers doing characters for Gaslands is the Polish company, Green Miniatures. They make and sell car parts, too, under their Mad Cars brand, but especially notable are their impressively-detailed human figures in a suitable scale (around 1:64) and suitably road warrior-ified. Wonderful products and wonderful people. Their figures and car parts sell for around US$15/blister pack. They have recently started releasing full car and motorcycle resin-cast kits in 1:64 scale, which is pretty exciting.

Box of Skulls
Games Workshop, $21
The Citadel Skulls box is not new. I got one last Christmas, but I love it so much and have found so many uses for it that I thought I'd include it here. As the name implies, this is nothing more than a box of skulls, 240 plastic skulls on sprues. The sculpts are amazingly detailed and the skulls represent many of the known races in the Warhammer and Warhammer 40,000 universe. If you're familiar with these game worlds, part of the fun is identifying what race the skulls belong to. You get tons of human skulls, in various stages of damage and decay, Ork skulls, Tau and Kroot skulls, demon skulls(?), giant skulls, and skulls of seemingly unknown races. They are perfect to use in terrain, on miniature bases, on Gaslands car conversions, and more. You can also use them to make cool earrings and other jewelry. This is one of my favorite model kits that I've used this year. Skulls. Just skulls.

OGRE Battle Box
Steve Jackson Games, $58
SJ Games produced some wonderful OGRE content this year. I wrote earlier in the year about the OGRE Miniatures Set 1, a collection of 43 plastic OGRE miniatures, a rule book, die, and everything you needed to play tabletop games of the classic sci-fi wargame. The OGRE Battle Box expands on that with a whopping 85 miniatures, five Ogre record cards, a reference sheet, assembly sheet, counter sheet, a six-sided die, a full rule book, and a giant poster map (the original G.E.V. map!). This is likely all the OGRE you will ever need, for under 60 bucks. I have so enjoyed painting these tiny 6mm minis. You can paint up a bunch in a single session and they look fantastic on the tabletop. Also: Keep an eye out in mid-December for an SJ Games Kickstarter for OGRE Battlefields, with new maps, new counters, new scenarios and new 3D constructs. (Thanks to Boing Boing community member, Israel B, for the Battlefields tip.)

Waterdeep Dragon Heist
Wizards of the Coast, $32
Wizards of the Coast keeps smashing it out of the park with their 5th edition D&D content. I got really excited reading through Dragon Heist and thinking of all of the amazing gaming possibilities it offers. The contents of the book is very linear and narrative-driven, and because it's a DM's guide, I don't want to spoil it. But suffice it to say there are plenty of inspired plot twists, fun reveals, complex and challenging villains, and all sorts of inviting adventures, all within the under-explored urban environs of Waterdeep. I have always been attracted to urban adventuring and don't know why so many fantasy RPGs spend so much time dungeon delving. It gets boring to me after a while. The idea of adventuring through Waterdeep, interacting with NPC neighbors, and playing in an urban setting are all very inviting to me.

Some gamers have complained that the linear narrative of this campaign makes gaming it a little forced in spots (where the DM has to move things in a certain direction rather than letting the party more freely explore) and that, if you make choices between the available villains, settings, and situations, you end up leaving a lot of content unused, making this an expensive purchase. Personally, I don't see why you couldn't use this content in another campaign. In many ways, this is also a Waterdeep sourcebook that you could pull from for other urban adventures. Dragon Heist covers character levels 1-5. As I write this, I just got the follow-up tome, Waterdeep: Dungeon of the Mad Mage. It picks up where Dragon Heist leaves off, allowing players to lower themselves down into the extensive dungeons of the mad wizard Halaster Blackcloak, deep beneath the streets of Waterdeep. Mad Mage is designed for character levels 5-20.

"The Masters" Brush Cleaner and Conditioner
I can't believe it took me so long to finally break down and buy a pot of "The Masters" Brush Cleaner and Conditioner. I had heard modelers rave about this brush soap and conditioner for ages. It's a game changer. Not only does it do a great job of cleaning and restoring your brushes, when you're done, you add a little Masters to your brush and twist it (using the crease of your palm) into a sharp point. This helps maintain the points of your precious brushes. $6.43 (delivered, Prime) for 1oz on Amazon. It will last you a long while. More from me on painting minis here. And here is Jeremy of Black Magic Craft giving his review of Masters.