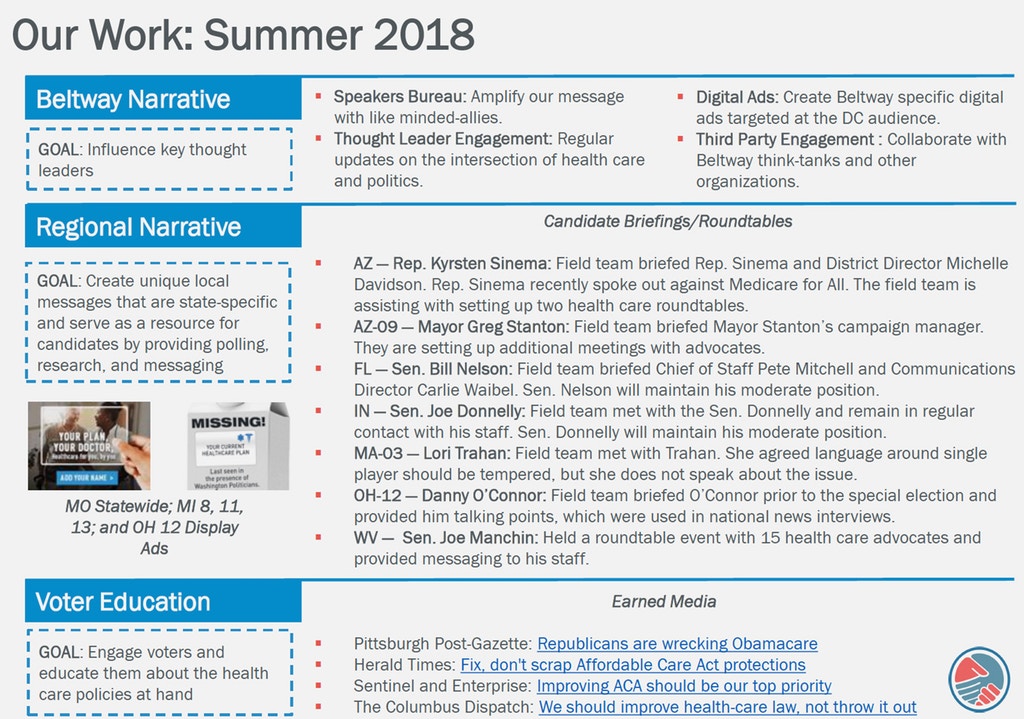 The slides and the accompanying reporting paint a picture of party establishment figures who have cycled into the lobbying industry -- former staffers for Obama and both Bill and Hillary Clinton -- and are now guns for hire, taking for-profit health industry money to try to scuttle the idea of extending universal health care to everyone in America.

The effort to reframe the debate has two prongs: a set of messages crafted for elite DC policymakers and another set aimed at heading off the mounting public approval for Medicare for All, now supported by 70% of Americans including a majority of registered Republicans.

As you might expect, given the stiff opposition, the Partnership's playbook hints at some pretty dirty tricks.

In one planning document circulated over the summer, the Partnership suggested a series of messages to wean Americans away from supporting single payer. The talking points emphasize that the current system provides “world-class care,” and that any move away from the Affordable Care Act would be “ripping apart our current system.”

The strategy exploits familiar themes that have long been used by business groups against new government health care programs, calling for allies to say lines such as “bureaucrats in DC have no understanding of a person’s medical situation and will be making decisions about your health care instead of doctors.”

The Partnership plans to form a speakers bureau of former Democratic elected officials who can leverage the media to make the case that expanding Medicare is bad politics and policy. The memo names former Democratic Majority Leader Tom Daschle, now a health insurance lobbyist at the law firm Baker Donelson, as one such potential surrogate.

The memo points to early success in shaping media coverage, citing several “earned media” columns such as one published in August by former Rep. Jill Long Thompson, D-Ind., which argues that Democrats should only focus on small reforms to the Affordable Care Act, and warns against wasting political capital on pursuing a “government-controlled health insurance system.” Thompson, now an associate professor at Indiana University Bloomington, did not respond to a request for comment.