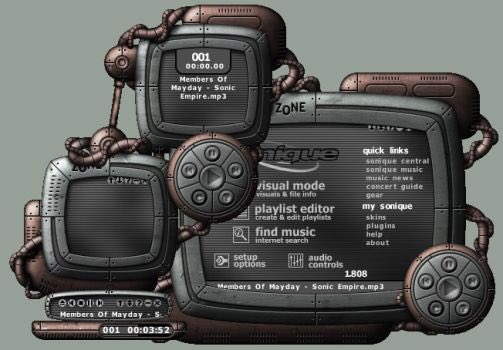 Winamp was infinitely customizable, and there was an exuberant practice of coming up with MP3 player skins (some of Winamp's competitors adopted its skin format, making the skins interoperable among different players), and sites devoted to featuring and distributing the coolest skins.

This is long gone -- the sites, the files, all of it, except for the fraction preserved by the Internet Archive. But Google Images still preserves fragmentary relics of this lost art, and John Hendren has rounded up a selection of "unusable and incomprehensible skins" from the glory days.

years ago most people used winamp to listen to mp3s on their computer. but there was another program, sonique, that supported skins with transparency and altering object placements. so the internet made hundreds if not thousands of unusable and incomprehensible skins for it pic.twitter.com/sACR8a7Kjr