Trump is not only a moron – Rex Tillerson also says he is 'undisciplined,' 'doesn't like to read' and tries to break the law 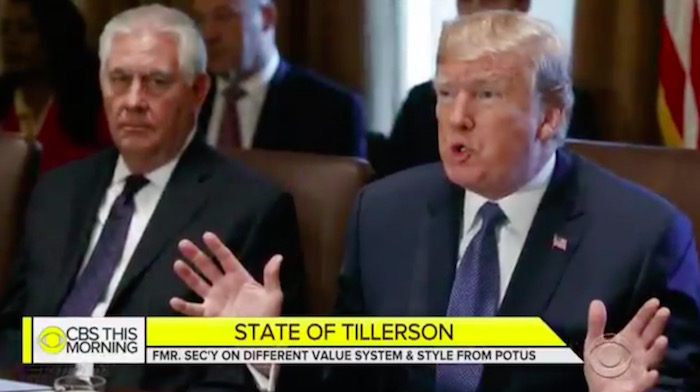 Former Secretary of State Rex Tillerson, who called Trump a "moron" while he was in office, from which he was later fired, has expressed some more choice thoughts on the president.

Speaking to Bob Shieffer last night, which was aired on CBS, Tillerson said, "What was challenging for me coming from the disciplined, highly process-oriented Exxon Mobil corporation, to go work for a man who is pretty undisciplined, doesn't like to read, doesn't read briefing reports, doesn't like to get into the details of a lot of things..." He also said that Trump "acts on his instincts," which "in some respects looks like impulsiveness."

WATCH: Former Secretary of State Rex Tillerson is speaking publicly about what led to his firing in March by President Trump.

Not seen in the clip above but mentioned in The Washington Post is that Tillerson then talked about "how Trump as president regularly attempted to do things that violated the law."

“So often, the president would say, ‘Here’s what I want to do, and here’s how I want to do it,’ " Tillerson said, according to the Houston Chronicle, “and I would have to say to him, ‘Mr. President, I understand what you want to do, but you can’t do it that way. It violates the law.’ ”

Tillerson also wasn't keen on Trump's use – and the American's love of – Twitter.

“I will be honest with you: It troubles me that the American people seem to want to know so little about issues — that they are satisfied with a 128 characters,” Tillerson said.

He was quick to say that that wasn’t meant as a shot at Trump but our political system more broadly. Next to his other comments, though, it wasn’t difficult to see he was lumping Trump with all those Americans who aren’t intellectually curious enough about policy and the actual details of U.S. government.