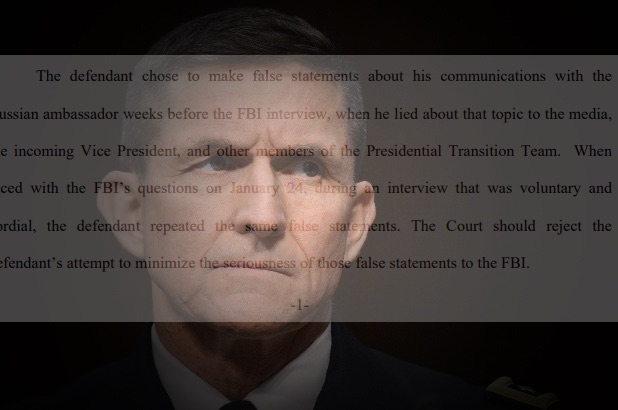 On the eve of former Trump aide Michael Flynn's sentencing on felony charges, special counsel Robert Mueller has released a January 2017 FBI memo that details an interview with Flynn by agent Peter Strzok and another FBI agent.

Here is a PDF copy shared by USA Today.

In the interview described in the SCO memo, Flynn --President Donald Trump's national security adviser at the time -- lied about his contact with Russia's Ambassador to the United States at that time, Sergey Kislyak.

Flynn, writes Mueller, “does not need to be warned it is a crime to lie to federal agents to know the importance of telling them the truth.”

This will be big.
Judge in Flynn case says that the memo, written by FBI agents following their interview with Michael Flynn at the White House, should be made public, with some redactions allowed, and will be relevant at his sentencing. This memo had only been filed under seal.

From the Daily Beast's synopsis:

The document, dated February 2017, recounts Flynn’s conversation with FBI agents at the White House in January of that year. The notes state that agents asked Flynn if he remembered asking Russian Ambassador Sergey Kislyak to refrain from retaliating against President Obama’s expulsion of Russian diplomats for meddling in the 2016 election. Flynn responded by saying, “Not really. I don't remember. It wasn’t ‘Don’t do anything.’” Agents also asked Flynn if he asked Russia and other countries to vote down a pending U.N. resolution condemning Israeli settlements and Flynn claimed the calls were only polling about “where countries would stand on a vote” and not an attempt to sway them. Mueller’s office later charged Flynn with lying to the FBI on both counts. He pleaded guilty and is set to be sentenced on Tuesday.

You can read the entire document here.

On the eve of Michael Flynn's sentencing hearing tomorrow, the judge has ordered Mueller's office to publicly file a redacted version of the 302 (interview notes) that an FBI agent prepared after Flynn's Jan. 24, 2017 interview — the one he later admitted lying at pic.twitter.com/4RhdGvZrwF

One of Flynn’s lies described in the memo, came in response to the agents asking him about the US’s expulsion of Russians.
He was asked if he had encouraged Kislyak not to retaliate. “Flynn responded, ‘Not really. I don’t remember.’ It wasn’t, ‘Don’t do anything,’” Flynn said.

From the memo: “Flynn again stated that he appreciated the interviewing agents reminding him that he had another conversation with Kislyak.”

That’s the consensus now, but at the time, his calls had been publicly reported by @IgnatiusPost and there was lots of public discussion about whether he violated the Logan Act. Valid or not, he might very well have been concerned about it. https://t.co/vKwkHCyTFz

Imagine what the FBI agents thought as they were in the middle of an explosive CI investigation that included Flynn and he lies to them?

The statement of offense Flynn pleaded guilty says: FLYNN called the Russian Ambassador and requested that Russia not escalate the situation and only respond to the U.S. Sanctions in a reciprocal manner.

I asked @Comey today to respond to criticism that the FBI interview of Flynn was not done properly. “Oh come on. Think about what’s happening in the Republican Party. They’re up here attacking the FBI’s investigation of a guy who pled guilty to lying to the FBI...That’s nonsense”

Flynn told the agents he did not understand why the Obama administration expelled 35 Russian intelligence operatives. “Flynn stated he could understand one PNG [persona non grata], but not thirty five,” the memo notes.