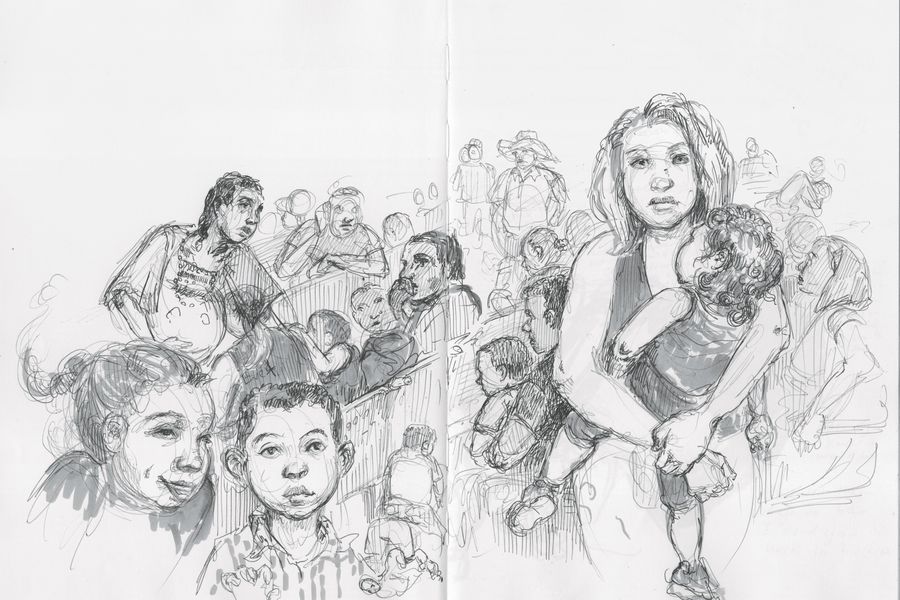 The intrepid and brilliant artist and journalist Molly Crabapple (previously) traveled to the immigration detention centers of the Rio Grande and interviewed and sketched the people she met there.

Crabapple's report is wrenching, a vision of "daily cruelty and heartache" where children are no longer ripped from their parents, but instead, families are imprisoned in frigid, bare-concrete cells called "hieleras" (iceboxes), denied medical care (including care for ill children), and humiliated and abused.

This alphabet soup of agencies does not make it easy for the media or anyone else to witness the detention centers and courtrooms that “process” the humans who cross the border. Officers withheld information from me about rules for visiting facilities, and presented elaborate, shifting requirements for access. On my first day reporting, I had permission to visit the Port Isabel Detention Center in Los Fresnos, where detainees work in the cafeteria and scrub toilets for $1 a day (a can of coke at the commissary costs $1.75). Port Isabel’s record of human rights complaints stretches back years; in 2010, inmates launched hunger strikes over medical neglect and the lack of legal aid, and a former guard wrote a memoir detailing the facility’s history of corruption and abuse, comparing it to Guantanamo Bay.

When a friend drove me up the unpaved detour road and past the barbed wire fences to the gate at Port Isabel, the guard said my friend wasn’t even allowed to drop me off since her name wasn’t on the list. Nor could I walk. When I asked to see the rule that forbade walking, the guard began patting his holstered gun. My only option, I was told, was to drive away and take a taxi. It cost $30 for a 10-minute ride (two taxi companies have a monopoly on visiting Port Isabel). “Imagine being a semi-traumatized Guatemalan woman just released, with no cash,” community activist Michael Seifert tells me. “This happens all the time. I don’t know why they can’t give them a ride.”