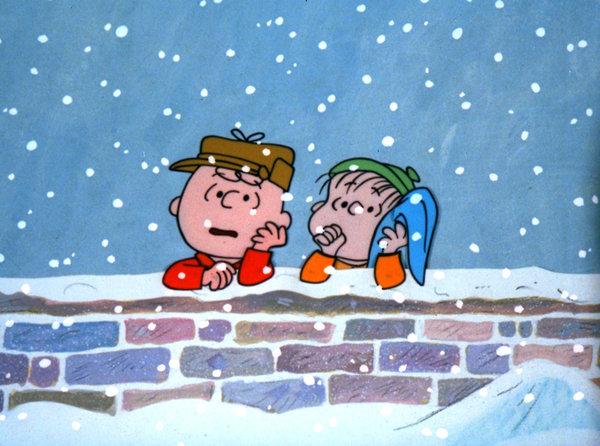 Presently hovering between Halloween and Christmas, after watching It’s the Great Pumpkin, Charlie Brown and on the way to A Charlie Brown Christmas. I was seven years old when Charlie Brown’s sad tree was first shown on TV in 1965 — the same year my parents divorced. Oddly, or perhaps not so oddly, my memory of that period has vanished.

I do recall watching Abbott and Costello in Jack and the Beanstalk one evening, and then being told after it ended that they were getting divorced. No recollection of anything after that for at least a year. Perhaps more.

But, despite the neuron wipe, these two cartoons have remained firmly rooted in memory. They are a comfortable pillow, a respite (at this point in life) from late middle age and an instant connection to simple happiness.

Everyone watches Great Pumpkin and Charlie Brown Christmas. And everyone loves them. It’s not just the happiness they bring, but the melancholy undercurrent that invites remembrance. Every one of us can relate in some way to one of the animated children in those shows. Or to Snoopy. And he’s a dog.

Something I recently read, the source of which has been forgotten only days later, put me on the track of other Peanuts TV shows from the 1960s. What? What? (Channeling Linus now.) Yes, my animated Peanuts began and ended with Pumpkin and Christmas (though I had been reading the comic strip since I could, well, read). There has been an enormous gaping hole in my existence — there were four more Peanuts specials on TV in the 1960s that I never saw.

… thank you Jesus and home video!

Way back in 2009, when some sense of sanity still was evident in the world, a two-DVD set of all six Peanuts TV specials from the 1960s was put on the market. When was someone going to tell me? It only took nine years. And now I channel Snoopy, dancing.

There is a generous and wonderful review of the DVD set containing the six TV specials on Collider.

So many heady concepts had finally worked their way into mainstream American culture when Charles Schulz hit his stride with the Peanuts comic strip. Introspection was growing, and psychotherapy along with it. A questioning of the meaning of existence began to permeate a post WWII, post-McCarthy climate, and a simmering distrust of consumerism was also on the back burner. Comedy, as is well known, comes from pain, and there are few more striking ways to depict adult inner turmoil than through the glib, deadpan worldview of elementary school children. Schulz clearly had adults in mind when he wrote his strip, and his challenge with the cartoon TV specials was to tap into that laughable grown-up insecurity while still painting a canvas that kids would want to watch.

Who says you can’t buy happiness? It’s only 20 bucks on Amazon. You can thank me later.

Most important (at least for me) is that almost all feature the original voice cast except for one (and even that has the original voice actor for Charlie Brown). The vocal memories, including the music, are so deeply embedded in my mind that even the tiniest difference sticks out.

Puncturing my happiness bubble for an instant is the fact that, upon looking up Peter Robbins on Wikipedia, I’ve discovered that he’s now incarcerated. Good grief, Charlie Brown!

Postscript: Wielding Google like the weapon it is, I have found the piece which eluded me earlier, on New York magazine’s website Vulture in which they run down every Peanuts special from worst to best. And we end where we began. At least I do.

Happiness is a warm DVD player