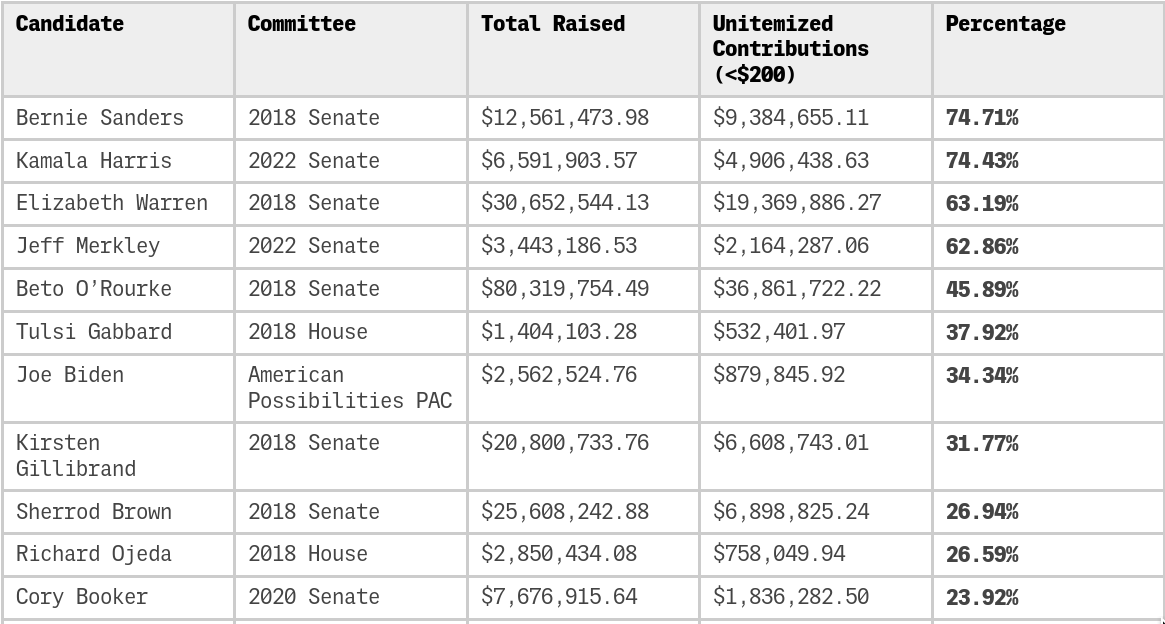 Generally, the DNC is a fucking pro-establishment dumpster fire (which may explain why it's foundering), but things are (finally) looking up.

The DNC has announced a new rule for participating in the primary debates for the 2020 presidential nomination: candidates must raise the majority of their money from "grassroots" donors who make small-money donation.

They have yet to define what this will mean, and there's a lot of potential ways this could go wrong, but as Bernie Sanders' 2016 digital fundraising manager writes in a detailed analysis in The Intercept, some of the most obvious problems (billionaires gladly losing money in fundraising appeals, spending $2 in advertising to raise $1 in small-money donation) don't seem to work. There's also a lot of potential Super PAC shenanigans that would need to be headed off.

Based on the 2016 and 2018 cycles, here are the candidates that could qualify: Reps Alexandria Ocasio-Cortez and John Lewis; and Senators Bernie Sanders, Kamala Harris, Elizabeth Warren and Jeff Merkley.

Not only is this a hopeful sign that the Dems are going to reduce their reliance on the big-money donor class, it's also pretty exciting to learn that "being popular amongst lots of ordinary voters" is going to be a criteria for nomination.

It may seem like this is a meaningless distinction; money is money, and money (for better or worse) helps win elections. But focusing on this aspect of 2020 Democrats’ finances is important, because they’re going against the only president of the modern era to ever win the White House by relying mostly on small-dollar donations. Donald Trump won in 2016 with 53 percent of his campaign’s money — even including his self-funding — coming from people donating $200 or less.

Trump has been even more prolific with grassroots donations as he gears up for his re-election campaign. Of the nearly $86 million Trump has raised in individual contributions to his campaign and joint fundraising account with the Republican Party since he took office, $62 million, or 72 percent, has come from small-dollar donations.

Behind this money is something that can’t be bought: supporter enthusiasm. Increasingly, money alone is not enough to win elections; it’s about how much of the money comes from small-dollar donors, and what else those donors do for the campaign.

Generally speaking, people make small contributions to candidates because they believe in their message or candidacy and want them to win. That also means it’s easy for a campaign to convert their donors into volunteers, and vice versa, as O’Rourke did in his race against Texas Sen. Ted Cruz. Cultivating donors and activists gets people excited and invested in the race, enabling them to give repeatedly, to evangelize for the candidate, and to do anything else the campaign asks for help with in order to win.