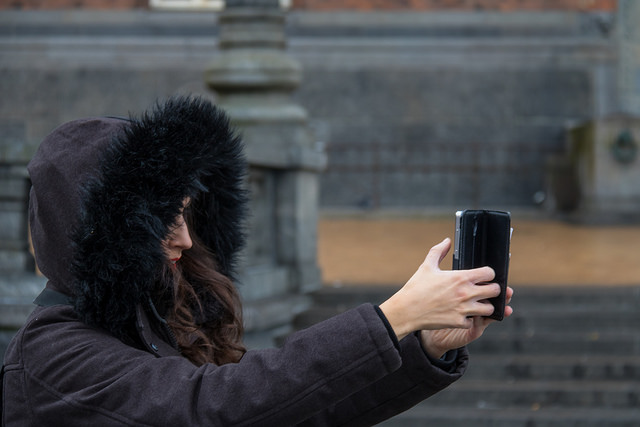 I'm feeling sad for humanity. "Selfie wrist" is a thing.

According to CBSNewYork, San Francisco doctor Levi Harrison is seeing a rise in an injury caused by "hyper-flexing your wrist inwards to capture the perfect selfie angle."

“Selfie wrist” can reportedly cause numbness and a tingling sensation that people feel in their fingers and wrists.

In 2006 New York photographer Noah Kalina became well known for his video of daily selfies he’d been taking for six years, called Everyday (Wikipedia). He hasn’t stop taking selfies and a couple of days ago he uploaded an eight-minute video with 20 years of selfies. [via Kottke] Image: YouTube

On this day in 1966, Buzz Aldrin took the first selfie in space while standing on his seat and hanging out of an open hatch as part of the Gemini XII mission. From NASA: This “stand up” EVA (the first of three during the mission) was conducted with the hatch off while Aldrin stood on […]

Evan Greer writes, "Hey Internet -- it's election time, and shills for Comcast, Verizon, and AT&T are going around telling our elected officials in Congress that no one cares about net neutrality anymore. They want our lawmakers to think they can just keep raking in campaign contributions and screwing over Internet users without any consequences. […]