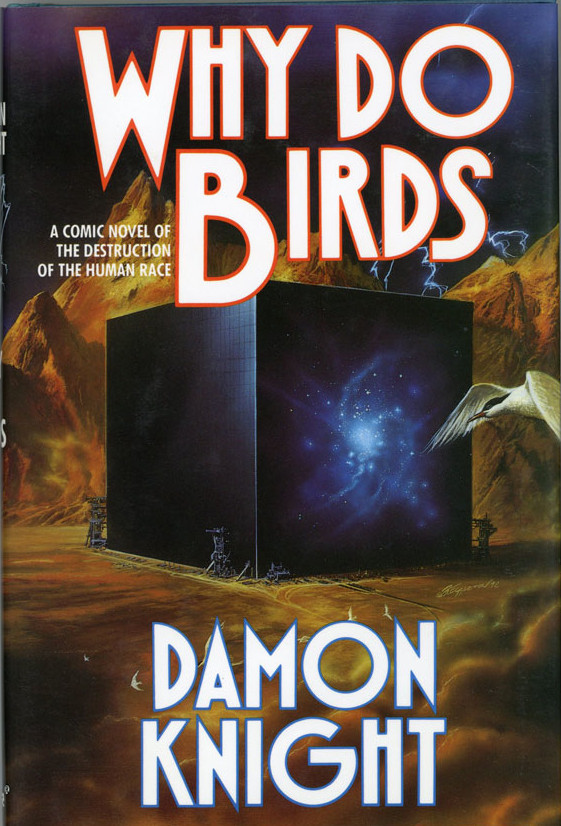 In 2002, a mysterious man is arrested for illegally occupying a hotel room: he says his name is Ed Stone, and that he was kidnapped by aliens from the same hotel room in 1931 and has just been returned to Earth, not having aged a day; the aliens have told him that Earth will be destroyed in 12 years and that before then, the entire human race has to put itself in a giant box (presumably for transport to somewhere else, though Ed is a little shaky on the details), and to help Ed with this task, the aliens have given him a ring that makes anyone who touches it fill with overwhelming good feelings for him and a desire to help him.

So begins science fiction grand master Damon Knight's great, underappreciated 1992 novel Why Do Birds, which I re-read in a single sitting yesterday after discovering a mint first-edition hardcover at the dangerously fantastic Iliad Books near my home in Burbank.

Knight was one of the field's great pioneers: the founder of the Science Fiction Writers of America, husband to the incredible sf author Kate Wilhelm, co-founder of the Clarion Science Fiction and Fantasy Writers' Workshop, mentor to hundreds of writers (including me!), and author of innumerable short stories, novels and teleplays, including the classic Twilight Zone episode "To Serve Man" (spoiler: it's a cookbook!).

He was an absurdist of the first order, a gifted author whose economy and humor rival the likes of Kurt Vonnegut. Why Do Birds was his penultimate novel, and I haven't rad it in more than 20 years, but I have never forgotten key details (there's a great scene straight out of The Space Merchants where marketing executives for The Cube Project discuss how they will float rumors that poor people will not be allowed in The Cube, in order to spark a mass movement demanding entry into the giant box -- and then there's the scene where they figure out the rate at which humanity will be reproducing itself as it is marshalled into great loading docks for suspended animation and insertion into The Cube).

There are more laugh aloud* moments galore in this, but also some really fantastic, first-rate technical speculation, and wry political commentary, and satirical pokes at the "golden age" of science fiction pulps. It's not like any novel you've ever read, and it blends much of what was wonderful about the early years of science fiction with a literary sophistication that came from a distinguished writer at the peak of his powers.

It's an absolute shame that this book isn't better known -- and it's a tribute to Tor Books's commitment to the field that they've kept it in print all these years despite its obscurity.

Why Do Birds [Damon Knight/Tor Books]

*Knight had a longstanding crusade to replace LOL with LA, on the grounds that "laughing aloud" was more grammatically correct than "laughing out loud"