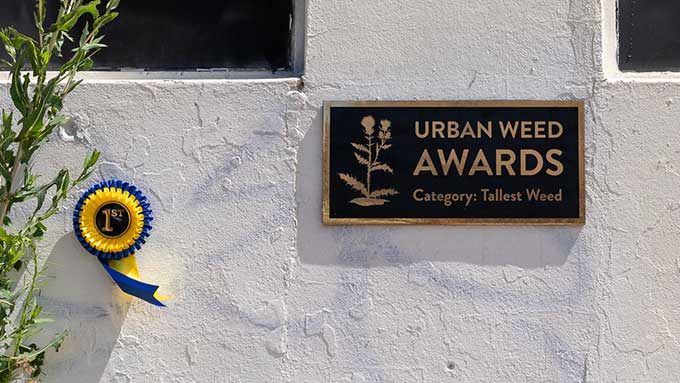 New York Times columnist and all-around unclassifiably interesting person Rob Walker has a book coming out in May called The Art of Noticing: 131 Ways to Spark Creativity, Find Inspiration, and Discover Joy in the Everyday. Rob also has an excellent newsletter also called The Art of Noticing Newsletter, and in the latest edition he writes about The Urban Weed Awards:

Celebrate the Tallest Weed. I’m a big fan of artist Michael Pederson, who does all sorts of super-clever street/public interventions in Australia, under the name Miguel Marquez Outside. I really dig the latest project he’s posted: The Urban Weed Awards.

As you can see: Here is an award plaque/ribbon for the “tallest weed” in some particular local.

There’s a bit in The Art of Noticing about “annotating the world,” and this is a really charming variation on that idea. Pick something that’s generally regarded as residing somewhere between “not exciting” and “a nuisance.” The weed is a perfect example, but maybe cracked sidewalks or potholes or power lines or whatever you can come up with. Now look for superlatives: The deepest pothole; the most picturesque sidewalk crack, the most rococo power line arrangement.

Come up with variations for suburban drives, office environments, or anywhere else. Dream up the criteria that makes it fun to identify the most notable examples of ordinary things. Find the tallest weed.

Stanford neuroscientist David Eagleman invented the Versatile Extra-Sensory Transducer (VEST), a wearable tactile display that translates myriad kinds of information, from speech to sounds to digital data, into patterns of vibrations on the skin. The device was inspired by Eagleman’s study of synesthesia, the fascinating neurological phenomenon whereby stimulation of one sense involuntarily triggers another […]

TastyFloats is a “contactless food delivery system” that uses ultrasound to raise bits of food and droplets of drink to your mouth without any utensils at all. While this method to levitate small objects is well known, what’s fascinating is that a small scientific study shows that the levitated food apparently tastes better. Researchers from […]

In the early 20th century, James “Smelly” Kelly used his legendary sense of smell and DIY inventions to find hazards, leaks, elephant poop, and eels that were causing problems in the New York City subway system. Atlas Obscura’s Eric Grundhauser profiles the the man known as The Sniffer: In addition to finding water leaks and […]