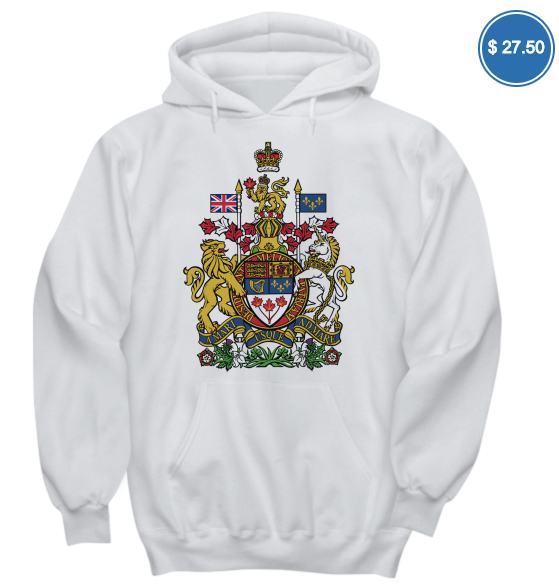 Faith Goldy is the white supremacist who failed in her bid for mayor of Toronto (despite an endorsement from US white supremacist Congressman Steve King); during her campaign, she unsuccessfully sued Canadian media monopolist Bell Media for refusing to run her ads, saddling her with an order to pay $43,117.90 in Bell's legal fees.

Goldy's racism has gotten her kicked off of Paypal and Patreon, which rules out the easy options for crowdfunding, so she's turned to selling merchandise that bears an illegal reproduction of Canada's coat-of-arms, calling it the "Canadian Heritage line."

Canada follows the British model of copyrighting works created by the government -- unlike in the USA, where works produced at public expense belong to the public and can be freely used by anyone for any purpose -- and the coat-of-arms comes with onerous licensing terms that prohibit commercial exploitation without a specific, paid permission.

Goldy ran as a "law-and-order" candidate whose campaign intertwined the idea of whiteness and lawfulness, and condemned racialised people for their alleged failures to obey Canadian law.

Goldy, who fashioned herself as a law-and-order candidate in Toronto’s most recent mayoral race, is likely doing something illegal. The Coat of Arms cannot be used for commercial purposes without the federal government’s permission. Here are 14 words from the Government of Canada’s website that might end Goldy’s retail empire:

“No person shall adopt in connection with a business… the arms, crest or flag.”