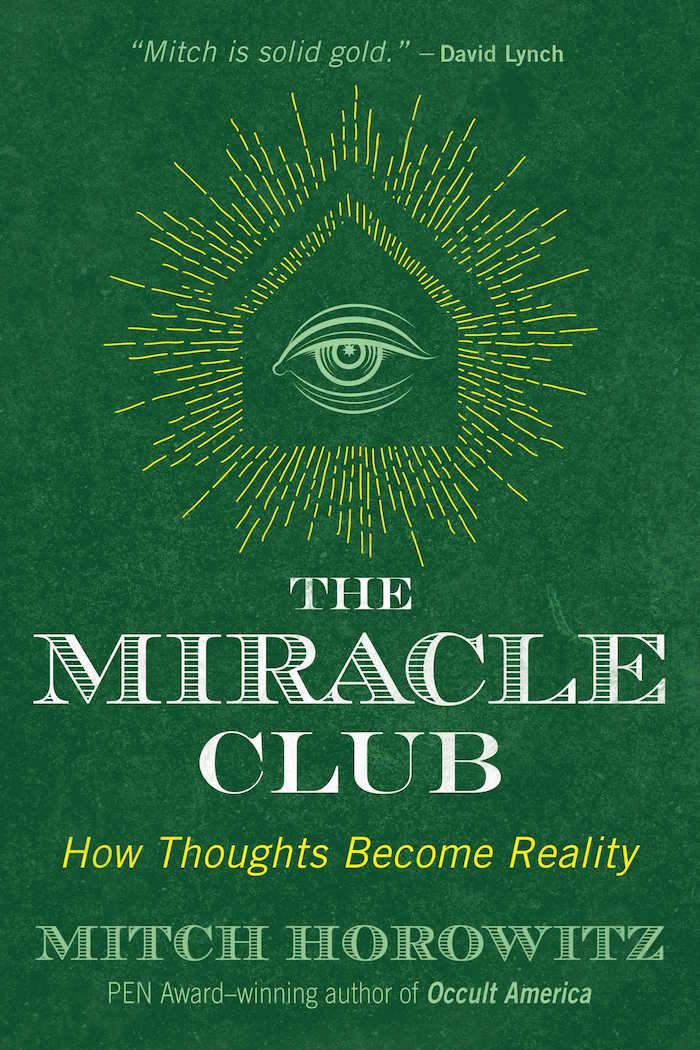 Mind metaphysics, or positive thinking, is a fascinating and mysterious field of personal exploration and inquiry. The guiding principle and basic tenet of mind metaphysics is that thoughts are causative, i.e. thoughts — those intangible acts of cognition, attention and intention — can actually shape reality and the material world in accordance with our wishes and desires. With roots in ancient Hermetic traditions, this profound idea made its way into culture, though not without resistance, via the New Thought and Human Potential movements, and more recently, Positive Psychology, as well as myriad incarnations in business motivation and the self-help industry.

The latest noteworthy work on the contemporary metaphysical scene, already hailed as a modern classic, is The Miracle Club, How Thoughts Become Reality by Mitch Horowitz.

A longtime Boing Boing pal, Horowitz is among the most articulate and authoritative voices in the fields of alternative spirituality, occult and esoteric history. He has curated and authored dozens of books, such as the fundamental Occult America: The Secret History of How Mysticism Shaped Our Nation, and One Simple Idea: How the Lessons of Positive Thinking Can Transform Your Life.

The Miracle Club is part memoir, part historical map, part "operating manual" for manifesting your true will and your heart's desires. The promise of the book is pretty simple: you can make miracles happen. There's a catch though: miracles ain't free — there is work to do.

Grounding his reflections in personal history and a life of experimentation, Horowitz comes across as the real deal: he is an authentic "adept mind" and he knows his stuff. Moreover, endowed with a deep and wide knowledge of the terrain, Horowitz is able to present the essential lineage of modern thinkers who shaped our present understanding of mind metaphysics.

Last but not least, Horowitz has curated an intellectually rigorous guide for the willing practitioner: a collection of tools and ideas to make, quite literally, miracles happen. You don't have to believe, just follow his invitation to the fringes of reason, and experiment with the ideas offered. As Horowitz says:

I believe that thinking, in a direct, highly focused, and emotively charged manner, expands our capacity to perceive and concretize events, and relates us to a nontactile field of existence that surpasses ordinarily perceived boundaries of time and thought. This outlook is less a personal doctrine than a line of experimentation.

Let's pause a bit on this crucial point. Does the mind actually affect and influence reality? This question calls into focus the very notion of what reality is, at its most fundamental level. Is reality matter, energy, spirit, divine intention, nature? Or some combination of the above? According to Horowitz, the mind indeed has creative agency, but its workings are just one thread — a meaningful one — in a tangled web of accidental, biological, natural, and psychological forces.

We live under the accidents of fortune, illness, forces of nature, traumas of the past, and on the waves of relationships with others, who may possess conflicting needs and aims. These are lawful facts of life. But the mind also wields a shade of influence — it is an influence that we don't fully understand, but one that is accorded steadily greater credibility by generations of study in medicine, psychology, biology, and the physical sciences.

This is an undoubtedly labyrinthine and thorny philosophically playground, but what if we are actually co-creators of our own reality? What if our thoughts play a greater role in shaping our experiences and circumstances than is generally acknowledged? What if there are human capacities, still little understood, for affecting the world in a manner beyond our current understanding of physics? The persistent scientific skepticism over mind's effect on matter is often based on outdated assumptions about the nature of reality itself. Simply the fact of acknowledging and clearly describing unusual aspects of reality can encourage a renewed and fresh psychological experience of these possibilities. It's as if our intellectual and social practices "switch on" and "switch off" a set of latent universal human potentials.

I argue that we can pierce the thin veil that separates mental and spiritual experience, thus using our minds not only as tools of cognition and motor function but as instruments of navigation into higher, unseen realms of psychology and cause and effect. We may be unable to see, describe, or fully identify these other spheres of existence — but their impact is palpably felt in our lives.

So just give these ideas a try. Experiment with the capacities of your mind, and see for yourself what happens. And if you experience results: go and tell other people. That's the game.

What do I personally believe of all this jazz? As a practitioner of mind metaphysics techniques myself — and having decided to write the praise for this book in the first place — my own beliefs are summed up by the lovely, suggestive rhymes of author Henry Van Dyke:

I hold it true that thoughts are things;
They’re endowed with bodies and breath and wings;
And that we send them forth to fill
The world with good results, or ill.

It’s hard to say much about My Lovely Wife, by Samantha Downing, without spoiling the twists. The story is told by the husband (we never learn his name). He and his wife (Millicent) do bad things to spice up their marriage, but they also appear normal to the people who know them. They’ve been married […]