Terrorise other beachgoers with the Beach Behemoth, a 12-foot beach ball 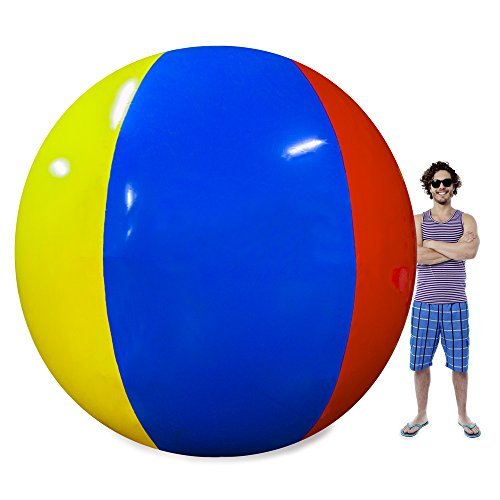 The Beach Behemoth is a 12-foot beach ball. Perhaps you think that this is a mere toy, one of those ultimately trivial impulse buys of no permanence beyond momentary amusement. This is because you have not read the buyer reviews at Amazon.

We took this ball to the beach and after close to 2 hours to pump it up, we pushed it around for about 10 fun filled minutes. That was when the wind picked it up and sent it huddling down the beach at about 40 knots. It destroyed everything in its path. Children screamed in terror at the giant inflatable monster that crushed their sand castles. Grown men were knocked down trying to save their families. The faster we chased it, the faster it rolled. It was like it was mocking us. Eventually, we had to stop running after it because its path of injury and destruction was going to cost us a fortune in legal fees. Rumor has it that it can still be seen stalking innocent families on the Florida panhandle. We lost it in South Carolina, so there is something to be said about its durability.

First of all, if you have your heart set on this, and want this GIGANTIC ball, there is technically nothing wrong with this product, but PLEASE take a minute to consider some things that I did not consider before imposing this monstrosity onto our son's graduation party. ...

Once it was completely blown up, (about an hour and a half with a small air compressor), it bounced....EVERYWHERE....across people, picnic tables, horse fence, the neighbor's yard, and INTO A FOUR LANE HIGHWAY!!!!!!! My party goer teens were trying to keep it from causing a pile up in front of our house! ...

The boys played with ok for a while, until it had lost enough air for one boy to think he could jump on it like a trampoline. That's when he bounced over the top of it and came down to the ground, breaking his collar bone.

You don’t really appreciate just how large a 12 ft beach ball is until it is rolling like crazy across the backyard, bowling over small children and getting launched up into the air. Do not buy if you live anywhere that might be described as “windy” or “gusty” or even “just a little breezy”. Light enough to reach "Holy God! Where's it going to land?" altitudes. A 12ft beach ball can destroy a lot of potato salad, let me tell you!

Do not inflate in your living room.... Or anywhere that has a door between you and where you want the ball to be.

The Beach Behemoth [Amazon, via GiveMeInternet]