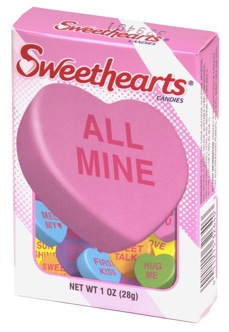 There will not be fresh Sweethearts candies this Valentine's Day.

Known as "conversation starters," these candies have always tasted like a chewable antacid or gas relief pills. Never have they helped me find love.

Next year in candyland!

For the first time since they made their debut in 1866, the New England Confectionery Company (Necco) will not be selling Sweethearts Conversation Hearts.

Last July, Necco closed its doors and the SweetHearts brand was sold to Spangler Candy Company, according to CandyStore.com. Since it typically took Necco 11 months to produce 8 billion candy hearts, there was not enough lead time for the new company to create the hearts and sell for this season.