As the German Government Abandons Small Businesses, the Worst Parts of the EU Copyright Directive Come Roaring Back, Made Even Worse 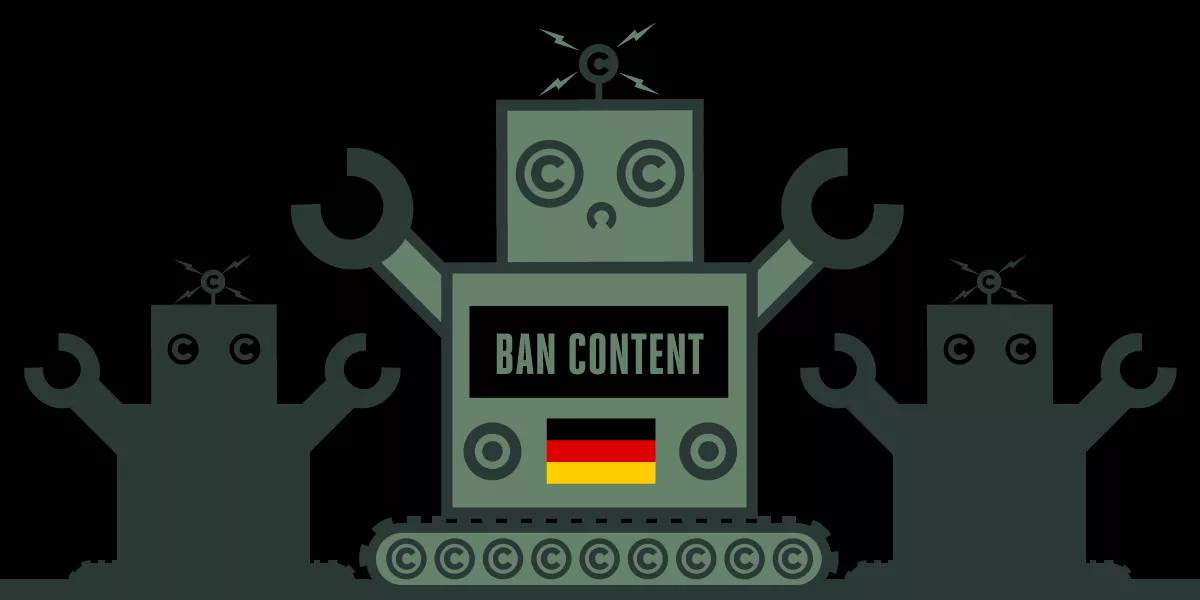 Last month, it seemed like Europe had been saved from a dangerous attempt by corporate lobbyists to hijack copyright legislation in order to add a few points to their balance sheets, at the cost of a free, fair, open internet. Now, thanks to Germany's decision to turn its back on small European tech companies, the EU is poised once again to hand permanent control over Europe's internet to the United States’ Big Tech sector, snuffing out the small- and medium-sized enterprises of Europe.

The new European Directive on Copyright in the Single Market is a grab-bag of updates to EU-wide copyright rules, which have been frozen in time since their last refresh, in 2001. But the Directive been imperiled since last spring, when German MEP Axel Voss took over as rapporteur, and promptly revived two controversial, unworkable clauses.

To remain credible, the EU must reject this haggling between giant commercial interests—and put the public good first.

Voss's deadly pet ideas were, first, a proposal to let news sites decide who could link to them and to charge for the privilege (Article 11); and second, a proposal to require every platform for public communication to invent and deploy copyright filters that would prevent any user from infringing copyright, even momentarily, by suppressing any communications that appeared to contain a copyrighted work of any kind (Article 13).

The response was swift and decisive: more than a million Europeans promptly wrote to their MEPs to demand that the Directive be voted on clause-by-clause, allowing for Articles 11 and 13 to be amended. However, the opposition split its vote among many different amendments, and Articles 11 and 13 survived (and the number of Europeans opposing the Directive has ballooned to more than four million, making the anti-Directive petition the biggest one in European history).

In the months since, Voss and his backers have obfuscated and spun the proposals, making cosmetic changes that do not alter the underlying facts: under Article 11, virtually any attempt to link to the news will require a license; and under Article 13, companies that do not have hundreds of millions of euros to invest in filters (that will surveil and arbitrarily censor Europeans' communications and creative work through unaccountable alogrithmic [mis]judgments) will face broad and unpredictable liability. That means that only rich, established Internet companies — the YouTubes and Facebooks of the world — will survive contact with the new Directive.

Despite the superficial nature of these changes, they were unacceptable to the entertainment industry execs, even the ones who dreamt them up in the first place.

Then came last month's near-fatal blow: despite hard-sell lobbying from a filter company, the representatives of Germany, Belgium, Poland, Sweden, Luxembourg, the Netherlands, Finland and Slovenia, Italy, Croatia, and Portugal refused to allow Articles 11 and 13 to proceed.

But a month is a long time in politics. Today, the negotiators for Germany reversed themselves, and because of Germany's large population and EU rules, that means that the Directive will now almost certainly move on to a final vote in the EU Parliament, only weeks before the next EU elections.

The decisive factor in convincing Germany's negotiators to abandon their position was a feel-good exemption that gives the appearance of protecting small EU tech businesses, but will do nothing of the sort.

Under the new proposal, companies earning less than €10,000,000/year, until they have been in business for three years, will be exempted from the requirement to establish filters.

The new rules give large corporate rightsholders the power to demand that online communities pay whatever price is offered to license anything their users might conceivably upload.

But the day that company earns its 10,000,001st Euro, or reaches its third birthday, it will have to find hundreds of millions of Euros to comply with the Directive.

It's worse than that, actually, because after the company earns its 5,000,000th Euro in a given year, it will have to implement a "notice and staydown" filter that will be nearly as onerous as the full Article 13 regime.

Either way, this is a death sentence.

To add insult to injury, the new rules give large corporate rightsholders the power to demand that online communities pay whatever price is offered to license anything their users might conceivably upload: a website for fishing enthusiasts could be forced to license the entire catalogues of every stock-art company in the world.

It’s even worse for the sort of services that might potentially challenge established, affluent, Internet companies—those that aren’t looking to make a profit, but need to bring in cash in order to survive. If you never intend your federated, decentralised, or volunteer-driven service to make a penny, but you have managed eke enough to survive for three years: well congratulations, in Europe, you’re just about to hit requirements that will either bankrupt you, or be technically impossible, or both. (The proposed language makes a foray into limiting the affected sites to those hosting content for "profit-making purposes"—but like "commercial-scale" in previous copyright proposals, "profit-making" is a term designed to be contested (Are you profit-making because you've never formally become a European non-profit? Or are you profit-making because you're not making a loss?).

There is no version of Article 13 that is safe for small European competitors to US Big Tech. Google and Facebook were able to grow because they did not have to find millions to police every user's every utterance for compliance with copyright law. Putting this drag on European firms will only increase the dominance of the entrenched players and, ultimately, make them harder to negotiate fair deals with.

So what now? In the Council, miracles could happen: the other negotiating teams are still being deluged with requests from all sides to re-consider the two Articles, and German’s concession may still highlight other differences. There’s still a chance that the negotiators will choose to delete both Article 13 and Article 11 to save the Directive. But, if not, the Copyright Directive will head towards an election-eve vote in the European Parliament.

Before it gets there, it’s imperative that anyone who worries about the effects of these proposals put pressure on MEPs to vote against the Directive, as the only sure means of killing Articles 11 and 13. They are unsupported by evidence, dangerous to public discourse and wildly unpopular with both voters and experts.

EU officials frequently lament the lack of public engagement with the EU's debates and processes. The public interest in the Copyright Directive has been off-the-charts, utterly unprecedented. Even at the best of times, the EU can't afford to ignore the will of Europeans to make a handful of lobbyists and executives happy—but especially not on the brink of an election, as the EU itself faces the real risk of runaway dissolution, should Brexit sentiments spread to other nations. To remain credible, the EU must reject this haggling between giant commercial interests—and put the public good first.