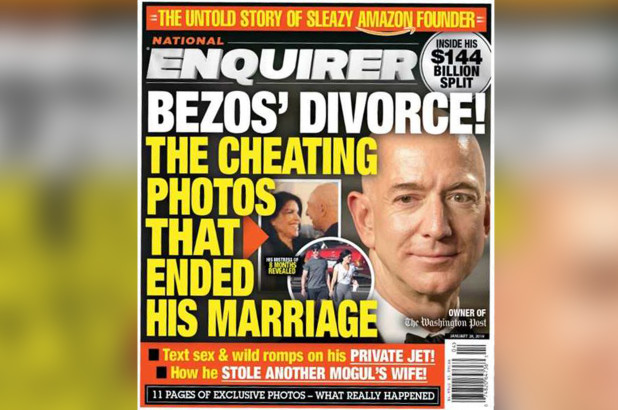 In an extraordinary post on Medium, Jeff Bezos has revealed threatening emails he received from attorneys for The National Enquirer, after Bezos refused to call off an investigation into how the paper got access to his private text messages.

"In the AMI [owner of the National Enquirer] letters I’m making public," writes Bezos, "you will see the precise details of their extortionate proposal: They will publish the personal photos unless [my lead investigator] Gavin de Becker and I make the specific false public statement to the press that we 'have no knowledge or basis for suggesting that AMI’s coverage was politically motivated or influenced by political forces.'"

I am leaving the office for the night. I will be available on my cell — 917 XXX-XXXX.

However, in the interests of expediating this situation, and with The Washington Post poised to publish unsubstantiated rumors of The National Enquirer’s initial report, I wanted to describe to you the photos obtained during our newsgathering.

In addition to the “below the belt selfie — otherwise colloquially known as a ‘d*ck pick’” — The Enquirer obtained a further nine images. These include:

· Mr. Bezos face selfie at what appears to be a business meeting.

· Ms. Sanchez response — a photograph of her smoking a cigar in what appears to be a simulated oral sex scene.

· A shirtless Mr. Bezos holding his phone in his left hand — while wearing his wedding ring. He’s wearing either tight black cargo pants or shorts — and his semi-erect manhood is penetrating the zipper of said garment.

· A full-length body selfie of Mr. Bezos wearing just a pair of tight black boxer-briefs or trunks, with his phone in his left hand — while wearing his wedding ring.

· A naked selfie in a bathroom — while wearing his wedding ring. Mr. Bezos is wearing nothing but a white towel — and the top of his pubic region can be seen.

· Ms. Sanchez wearing a plunging red neckline dress revealing her cleavage and a glimpse of her nether region.

It would give no editor pleasure to send this email. I hope common sense can prevail — and quickly.

"These communications cement AMI’s long-earned reputation for weaponizing journalistic privileges, hiding behind important protections, and ignoring the tenets and purpose of true journalism," writes Bezos. "Of course I don’t want personal photos published, but I also won’t participate in their well-known practice of blackmail, political favors, political attacks, and corruption. I prefer to stand up, roll this log over, and see what crawls out."

Bezos's response is actually a textbook example of how to respond to extortion. His consultant, Gavin de Becker, literally did write the textbook - here's the section on extortion from his book "The Gift of Fear": pic.twitter.com/Wt7JDNhBCl

An Australian woman is in stable condition after a massive freeway sign toppled onto her car near Melbourne. The dashcam video, captured by the driver behind her, is absolutely terrifying. (I wonder if this will fit in J.K. Simmons’ insurance-claim wunderkammer.)

Drivers are successfully not dying in their Ford-made vehicle, thanks to this one simple trick

My Grandfather used to say that Ford stood for “Found Off Road, Dead.” It was funny to a kid growing up,  but it isn’t true: Ford makes some damn fine vehicles. Mostly. According to The Washington Post, Ford announced, earlier this week, that they were recalling 1.4 million vehicles for what’s really just a minor […]

In his first television interview since assuming power last Friday, Donald Trump compares himself to Peyton Manning. Everything else was even weirder. Construction of a wall along the US-Mexico border may begin within a few months.