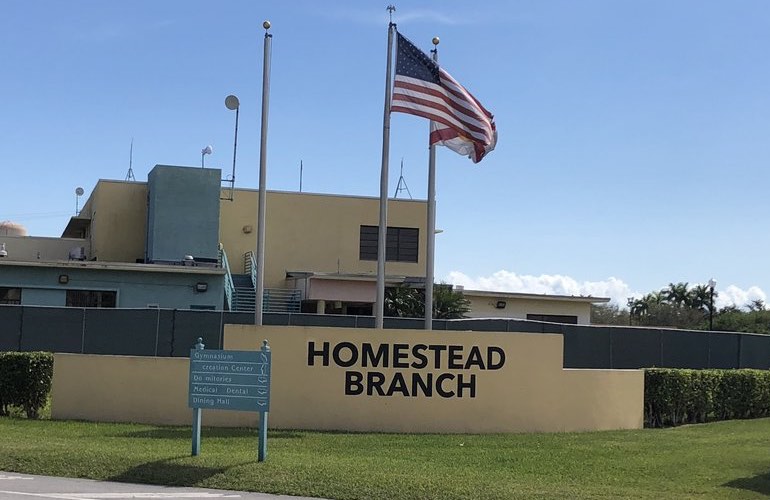 “They can't hug [their own siblings] goodbye. If they do, they're told they will be written up and it could affect their immigration case."

Thousands of migrant children who present themselves at the US-Mexico border seeking asylum are sent by the U.S. government to an emergency intake facility in South Florida.

The Homestead "temporary influx facility" is the largest shelter for migrant children in the country. Homestead is the only such facility run by a for-profit corporation. It is also the only one that receives no oversight from state regulators.

From John Burnett's report for NPR:

Discipline is strict. The teenagers walk single file in groups of 12, escorted by a youth-care worker. They smile at a visitor and call out "hola" when greeted.

But that's all a reporter ever hears.

On these visits, journalists are not permitted to record anything, take photographs, or speak to the children. It's for the minors' privacy and protection, officials say.

Several days after the tour, a group of attorneys agrees to sit down and describe their interviews with two dozen of the migrant children. They have been granted access to these shelters by a federal judge to oversee the welfare of unaccompanied kids in federal custody.

"We see a very different picture," says Leecia Welch, senior director of legal advocacy and child welfare at the National Center for Youth Law. "We see extremely traumatized children, some of whom sit across from us and can't stop crying over what they're experiencing."

She continues, "We hear stories of children who are told from the first day of their orientation that under no circumstances can they touch another child in the facility, even their own sibling, even friends who they're saying goodbye to after many months of shared intense experience. They can't hug them goodbye. If they do, they're told they will be written up and it could affect their immigration case."

Welch concludes, "We see a very different picture than the reporters see."

PHOTOS: Top, John Burnett for NPR. Below: Nearly 1,600 teenage migrants are housed at a temporary emergency shelter in Florida run by a for-profit company. Image, U.S. Department of Health and Human Services.